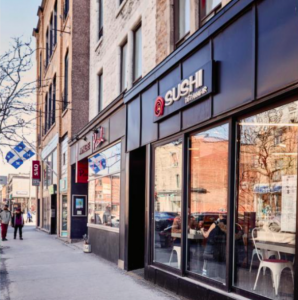 NingNing Xuan imagined herself working in big business when she first came to Canada from China to study commerce in 2001.

But after 15 years of owning and operating a specialized convenience store in downtown Montreal, featuring traditional convenience fare as well as unique food items, she’s learned that small is beautiful.

“Our store is perfect and our lives are so good now,” says NingNing, who owns Sushi Dépanneur with her husband, Xujuang Fan. “We love the business, each other and our customers.”

Located on a busy commercial street in Montreal’s trendy Plateau neighbourhood, Sushi Dépanneur is best known for the 100-plus kinds of sushi that Xujuang makes fresh to order at a food counter on one side of the store. Loyal customers come back for the wide variety of nigiri, sashimi and sushi and seasonal specials.

On the other side of the store is a grocery section run by NingNing that specializes in canned, packaged and dried foods, sauces and ingredients for Asian cuisine.

The store notably carries 20 kinds of soya sauce – including organic, dark and sweet – as well as sauces, ingredients and pastes to make specific dishes like Tom yum.

“Asian cuisine is very popular here now,” says NingNing, or ‘Nicky’ to her many customers and suppliers. “It’s different from Western cuisine because there isn’t a lot of baking and cooking involved. Many people love making and eating Asian food at home, so business is good.” 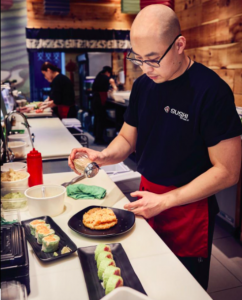 It is, however, the sale of sushi and other fresh-made Asian foods like rolls and sushi pizza (made with rice instead of flour) that generates the lion’s share of the store’s revenues and earns it local renown.

That was not the case when NingNing and Xujuang, who both hail from the northern Chinese port city of Dalian – but met as classmates at Carleton University in Ottawa – moved to Montreal in 2003 and went to work at Sushi Dépanneur.

The store had been opened a year earlier by NingNing’s sister Cathy and her husband Jao Letian, a certified sushi chef who had worked at high-end restaurants in China.

The two couples worked together for more than a year, with Cathy on cash and the others working at the small sushi counter at the back of the store.

“We were so lucky to work with Jao and learn on the job to be sushi chefs,” recalls NingNing. “He’s very serious and he’s a great teacher.”

She and Xujuang bought the business a year later and have run it on their own ever since.  According to NingNing, the business has grown slowly but surely through local word of mouth.

“Sushi wasn’t as popular then as it is now,” she says. “It took about five years before it really caught on.  Then – wow! – everybody went crazy for sushi and fish and vegetables and avocados and rice.”

Business has really boomed since 2015, she adds, when she and her husband moved the store to a bigger location on the same street – Avenue Mont-Royal Est - but close to a major subway station and an area rich with young professionals and students.

“We’re much better here,” NingNing says about the store, which neighbours a liquor store, a Second Cup and several restaurants and specialty shops. “All of our customers followed us here. And there are a lot of young people who like to spend money and eat healthy.”

The store’s 10 employees help prepare and sell sushi that is made fresh when ordered at the counter for takeout or by phone for delivery.

“There’s no pre-made except for some takeout boxes we always have ready at lunch and suppertime,” says NingNing. “They are very popular.”

She adds that she and Xujuang, who are now parents of a baby girl, have worked hard to build a prosperous business and a happy life for their young family in the country they now call home.

“Our goal has always been to focus on one thing we can do or improve to make it perfect,” says NingNing, who spends most of her time now at home taking care of the baby.  “I think we’ve done that in our store and in our lives.” 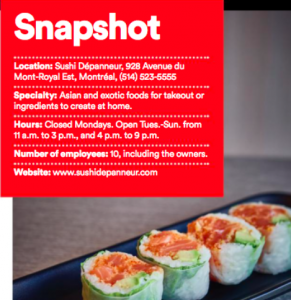 #1. Believe in yourself. Don’t listen to doubters but believe in your abilities and goals to run a successful operation.

#2.  Give 100%. Don’t ask employees to do things you need done. You know what you want and what the customer needs. Employees will follow your instructions and lead.

#3. Focus on quality and cleanliness.  Make sure you keep your store clean and buy only best-quality and fresh ingredients to showcase your store at its very best.

#4. Always smile and listen. Giving good service means being friendly at all times and understanding and meeting your customers’ needs.