In 1984, when Brian Ogilvie purchased a piece of land in Red Deer, Alberta, he built a convenience store, gas bar and the North Hill Car Wash. Now, this is one of six sites he owns in the area, all part of his Express 24 Food Marts business.

In the ‘80s, this triple-threat site was at the cutting edge of technology, but as the years passed, it could no longer compete with the newer technology available at other car washes in the area. “It was really behind the times,” says Ogilvie. “Our sales were starting to go down a little bit and it was hard for our customers to rely on the store, so we decided to just shut it right down, which was hard to do.” 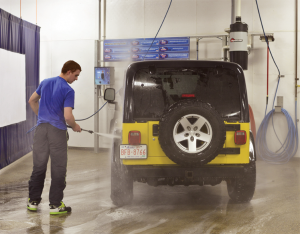 “We completely demolished the barn-style car wash, which is 5,400 square feet. We took out the mechanical rooms, we took out the electrical rooms … we took everything out. Only concrete walls were left,” he explains. Ogilvie worked with Pumps and Pressure, a company out of Red Deer, Alberta, to determine a new vision for the car wash.

The mechanical and electrical rooms were originally housed within the seven-bay car wash, but because of high humidity, they were deteriorating quickly. After moving these utility rooms to the drier atmosphere of the convenience store, there was a clean slate to work with. “We had quite a bit more space, and we were going to put in eight or nine bays, instead of seven. We got looking at it though, and since Red Deer is an active farming and oil community, the number of people who drive pick-up trucks is phenomenal. We decided to stay with seven bays and just make them all three-and-a-half feet wider,” he says. This decision made a big difference, and now each bay is 19 feet wide, allowing more room when washing, and easier maneuvering for the drivers.

The car wash also got new low-voltage fluorescent lighting, which is a welcome change from the inefficient sodium lighting installed in the ‘80s. “It’s so bright that it’s like the sun is always shining, even at night time! We’re extremely happy with that look,” says Ogilvie.

Despite being an industry veteran of more than 30 years, Ogilvie is proud to say that this renovation has been an amazing learning experience for him. “We’re learning that a car wash is not just something you set up and leave alone for life, like we used to. It’s something that has to be worked on and it’s something that changes depending on the time of year. There’s education involved; there’s a lot more to running these new systems than we thought,” says Ogilvie. 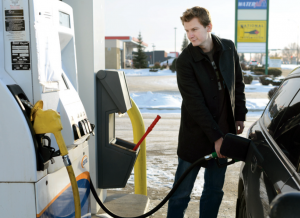 Another thing he’s learned is how efficient new systems can be. Before, Ogilvie was purchasing two gallons of city water just to make one gallon of spot-free rinse, and the second gallon of water was going down the drain. Now, that extra gallon of already-purchased water is being put to good use. “We have a 300-gallon tank in the mechanical room and instead of that gallon of water going down the drain, we keep it in that tank, which is hooked up to a 1,500-pound pump with a long fire hose. That’s what we clean the bays with. So we’re actually cleaning the bays with water that we used to lose. So there again, it’s a system designed to save utilities,” he says.

With the success of this renovation experience, Ogilvie is proud to say that he understands the importance of keeping up with changing technology. “Our gas sales are significantly higher now than they were before. It goes along with the whole picture; when you renovate and make everything top notch, people recognize that,” says Ogilvie.