For more than 60 years fibreglass underground storage tanks (UST) have been the gold standard for the fuel industry. Before this time gas retailers were plagued by metal tanks that corroded, leaked and spilled leaving costly messes operators were obligated to clean up. 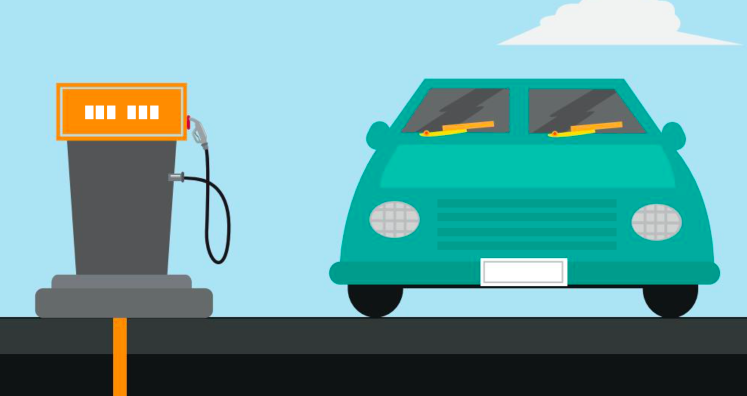 Owens Corning came to the rescue in 1963 with the first models of fibreglass reinforced plastic underground storage tanks. These new storage systems defied corrosive elements in fuel products. The first model offered a non-ribbed tank that had tapered ends for easy storage. Owens Corning discovered this model did not hold up well to the pressures from being buried and it developed buckling dimples in later models to help tanks stand up to the pressures of backfill. Next, footings were added to the ribs. This enhanced the strength and the design was largely complete.

With a basic design in hand, Owens Corning sought to prove the efficacy of these new tanks to regulators. Testing organizations such as Underwriters Laboratories (UL)  and Factory Mutual were brought in to demonstrate the tanks’ reliability. The testers advised using hemispherical end caps and they showed a need to revise surface loads, uneven supports, and external pressure resistance before accreditation could be given to the model. Owens Corning Model C was the first fibreglass tank with UL and Factory Mutual approval. Remarkably, the majority of these specifications created in the 1960s have remained relatively unchanged, an indication of the quality of the early work by engineers.

Once the tanks were standardized, petroleum retailers began work to determine how these fibreglass storage systems would best work at their sales sites. It was discovered that pea gravel and properly sized crushed stone were the best backfills to work with the designs that offered rounded end caps. Owens Corning patented its Model C in 1979 and the industry got busy replacing and upgrading its underground storage capability with these safer and more robust products.

Today, these designs have become the norm as the fueling sector looks for containment products that are safe, stable, and cost-effective. 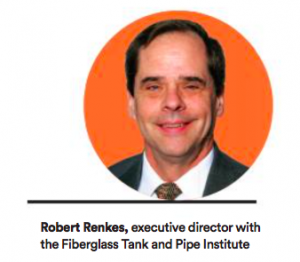 According to Robert Renkes, executive director with the Fiberglass Tank and Pipe Institute, a Tulsa-based trade association where the fibreglass reinforced thermoset plastic ("FRP") industry works together toward the common goal of advancing the use of members' fibreglass products, tanks have become much larger than they were years ago. “There are about 530,000 underground storage tanks in the U.S. This is down from over 2 million. The reasons are that capacity has grown and tanks are compartmentalized to hold a variety of products such as multiple grades of fuel and diesel. Tanks today are better. There are fewer of them. They tend to be double-walled and they are better installed than at any time in the past,” he says mentioning that the vast majority of USTs are covered by a 30-year warranty.

Renkes points out that back in 1988-1989  most underground tanks had been improved from single-walled steel versions. “A huge number of new fibreglass tanks went into the ground about 30 years ago. Our experience tells us they are continuing to do the job, but insurance companies and regulators now have concerns because of warranty issues. Warranties are based on the assumption that tanks have a ‘specified’ useful life expectancy. No-one really knows what this is. Tanks would have to be removed and analyzed to determine this. Should 30-year old tanks be removed and replaced? We do not know at this time, and there is nothing that tells us fibreglass tanks are failing,” he says, adding that one of the challenges operators may now face is rising insurance rates due to uncertainty from underwriters. Currently, there are some 13 insurance co’s in Canada and the US that offer protection for fuel storage tanks, some of which are now offering a variety of rates depending on the age of the tank.

• Revision of Section 10.13 to remove the recommendation to use metallic risers.

• A new recommendation that installers should confirm riser pipe is compatible with the product transferred/stored and approved for use by the authority having jurisdiction.

• A warning to use proper grounding techniques to dissipate static charge accumulation if a nonconductive riser pipe is installed.

• A note recommending the use of drop tubes to reduce turbulence and vapour buildup during fuel deliveries.

“Over the past ten years there has been concern about using non-metallic risers on tanks, “ says Renkes. “There was pushback years ago about using PVC and as a result, the industry became stalled on using non-metallic risers. With the UL listing of FRP risers demonstrating there is strength in thick gauge reinforced fibreglass plastic, the industry can now offer a complete non-corrosive tank and represents a great alternative and non-corrosive improvement for the trade.”

Renkes advice is for operators is to work diligently to keep water out of USTs, especially those that hold ultra-low sulphur diesel. “Water keeps alive microorganisms that go after metal and even though there is very little in the way of metal in current models of USTs these ‘bugs’ will work to corrode any metallic UST components.”

While US manufacturers such as Owens Corning (became Containment Solutions in 1995) and Xerxes/ZCL were behind early developments in product design for underground fuel storage, Canada developed its own regulatory environment that mirrored those in the US.

“Certainly, we have our own regulations and codes and these include manufacturers’ recommendations,” says Michelle Rae, executive director Ontario Petroleum Contractors Association (OPCA). She mentions that it is the manufacturers that advise on the lifespan of tanks, but organizations such as Underwriters Laboratories of Canada (ULC) and the Technical Standards and Safety Authority (TSSA) [ the TSSA is an independent, not-for-profit organization responsible for the delivery of a range of safety services in Ontario] are behind overall standards that govern codes, installation methods and maintenance best practices. For example, this January, TSSA advised that all double-wall underground pressure piping systems that were installed before January 1, 2006, be upgraded with Electronic Line Leak Detection (ELLD) by October 1, 2021.

“There are two Federal codes in Canada that govern underground storage tanks. There are the National Fire Code and the CCME (Canadian Council of Ministers of the Environment) where their Contaminated Sites Working Group has developed an environmental code of best practices. Provinces also each have their own stipulations,” she says pointing to the Alberta Fire Code as an example where authority for permits to install, remove or alter a tank are granted by local fire departments, or the TSSA’s Liquid Fuels Handling Code in Ontario.

Rae suggests its important to have a preventative maintenance program in place and operators should be prepared to keep accurate records that include installation date, monitoring data, and maintenance. “Insurance companies want good record keeping. Those without good records could expect higher rates or challenges with policies. And, this represents a small investment in time and labour costs that could end up saving big dollars down the road,” she says, concluding that petroleum contractors and UST manufacturers stand out as good sources of information on best practices. 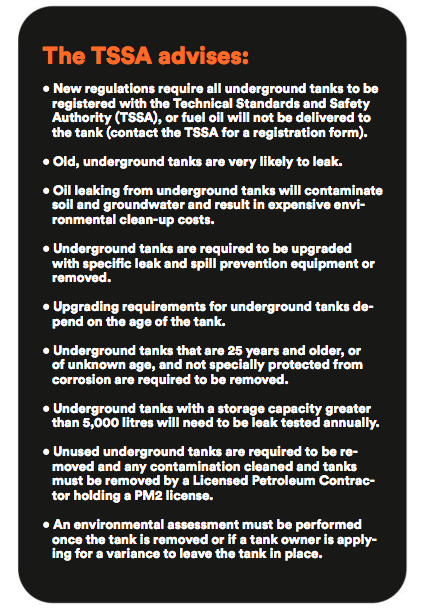