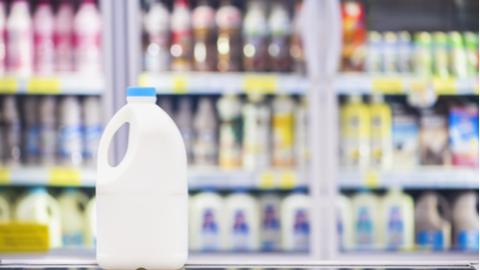 Inflation is at its highest level in 30 years and Canadian consumers are paying more for a wide range of products. However, the price of milk is going up even faster than inflation, according to a new study from consumer research company Field Agent Canada.

The February 2022 edition of the Canadian Fluid Milk Report shows that since June 2021, prices for four-litre packages of milk have increased by an average of 9.5%: Inflation is about 5.1%.

The report looks at retail prices for 2% milk at 169 retailers in 20 markets from coast-to-coast.

In late 2021, the Canadian Dairy Commission (CDC) announced a farm gate price increase scheduled for February 1, 2022 of $0.06 per litre of milk, in order to cover increasing input and production costs such as feed, fertilizer and energy.

“If these prices were passed directly through to consumers we would have seen an increase of $0.24 per 4L package of milk,” explained Jeff Doucette, general manager of Field Agent Canada. “However, since our last report in June 2021 we have seen prices of 4L milk increase by an average of $0.52 per unit nationally, which is equivalent to a 9.5% increase.

“The current inflation rate, which is at historic levels, is 5.1%. We are seeing milk prices growing at almost twice the rate of inflation as dairies and retailers also pass along their own increases on top of the farm gate increase.”

“The disparity between regions in the price of this commodity starkly underlines that the inefficiencies of smaller producers and markets has a direct impact on the pocketbooks of families," says Doucette.

Field Agent found that the cheapest stores to buy milk in Canada right now include Costco in Mississauga and Scarborough, as well as at Walmart in Winnipeg. All three stores had the same price in June 2021: a 4L of 2% milk retailing for $4.65 ($1.16/L). The most expensive milk in Canada was found at Circle K in Halifax with 2L of 2% milk retailing for $5.85 ($2.93/L).

In its report, Field Agent noted consumers "may still see those prices increase in the near future as it is very challenging for retailers to not pass along cost increases that are hitting stores en masse right now."