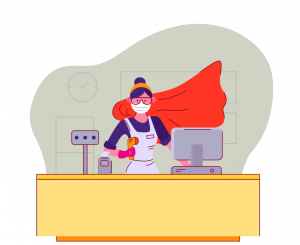 Calls for the return of hazard pay are mounting as workers on the front lines of Canada's retail industry grow increasingly anxious amid rising COVID-19 cases.

While some companies, including major convenience players in Canada, offered so-called hero pay to essential workers at the outset of the pandemic, most wage premiums ended as the first wave ebbed.

Yet retail workers say morale is lagging as COVID-19 cases spike across much of the country.

Without a pay bump that recognizes the risk of working during a pandemic, they say workers are increasingly calling in sick - leaving fewer staff to enforce rules around mask-wearing and physical distancing.

Some companies have pre-emptively addressed the issue.

Lowe's Canada said this week it plans to pay a discretionary bonus to all eligible Lowe's, RONA and Reno-Depot workers.

The Boucherville, Que., home improvement retailer said full-time staff will receive $300 later this month, with $150 for part-time staff. The October bonus is in addition to bonuses paid in March and August, and $2 per hour wage premium paid from April to July.

The Home Depot Canada said it has implemented paid sick leave benefits and is providing workers with an ongoing weekly bonus - $100 for full-time workers and $50 for part-time workers.

Ashley Chapman, vice-president of the Markdale, Ont., company, said the wage top-up was initially conceived as "danger pay'' to help get workers back in the door after a two-week shutdown last spring.

But he said given the rising cost of living, making the pay increase permanent for the company's 750 workers was "the right thing to do.''

"It was an easy decision for a family-owned business to make,'' he said, noting that he doesn't think it's fair to compare the ice cream maker to larger public companies.

"Everybody who owns shares in our company has the last name Chapman.''

Making the pay bump permanent is something unions across the country are calling for, arguing that the wage premium not only recognizes the ongoing threat of COVID-19 but also pays workers a living wage.

Yet some retailers have argued that they are now operating safely in a "new normal.''

In a June statement, Loblaw Companies Ltd. chairman Galen Weston called it "the right time to end the temporary pay premium we introduced at the beginning of the pandemic.''

"Things have now stabilized in our supermarkets and drugstores,'' he said. "After extending the premium multiple times, we are confident our colleagues are operating safely and effectively in a new normal.''

Many workers and unions disagree.

It's a debate currently playing out in Newfoundland and Labrador, where 11 Loblaws stores under the Dominion banner are shuttered amid an escalating labour dispute.

It's one of the first collective agreements to be negotiated in Canada since the start of the pandemic, and experts say it could serve as a forerunner for what to expect as other locals go to the bargaining table in the coming months.

Jennifer Green, a front-end cash supervisor at a Dominion in Conception Bay South, said 1,400 grocery store workers have been on strike for more than six weeks in an effort to obtain better wages.

She said without the COVID pay premium, she lives "paycheque to paycheque.''

"A lot of us were really struggling,'' Green said. "But when we got the $2 an hour raise, we felt important.''

She said when the pay premium was cancelled, workers felt "sad and upset'' and that going into work remained "nerve-racking.''

"It's been stressful and at times scary,'' Green said. "And it's been really, really busy with online orders and extra cleaning.''

Loblaw did not respond to a request for comment.

Some retail workers have had to deal with aggressive customers, with videos surfacing on social media of shoppers challenging rules around masks and physical distancing.

UFCW Canada spokesman Tim Deelstra said some of the union's members have been in "disgusting situations.''

"There have been screaming matches,'' he said. "Some of our members have been spit on or attacked by members of the public.''

The union is calling for a pay bump to recognize the ongoing efforts and risks taken by front-line workers.

"It's really overwhelming when we see the number of cases rising every day,'' she said. "Then we have anti-maskers come in or people who claim they have a pre-existing condition and don't wear masks: It's just a scary environment to be in.''

Nagy said at the outset of the first wave, many people were calling in sick. She said that changed when the pay premium was introduced.

"It's just good for the morale to feel appreciated,'' she said. "Otherwise we're basically risking our lives at a job where we can barely make ends meet.''