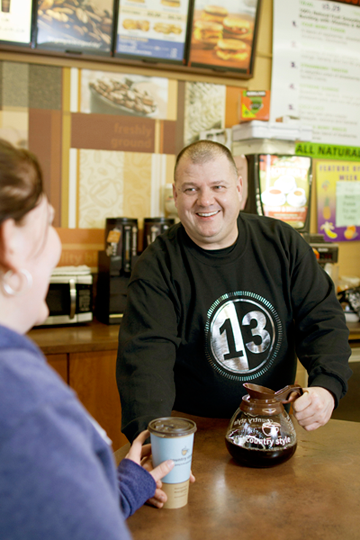 While other teenagers were embroiled in the usual high school drama, Lucky 13 owner Ray Seguin was off to a precocious start in the retailing game, hatching business plans with his siblings for what has become an independent c-store chain in the North Bay, Ont. area.

Seguin says his sites have come a long way since the first store opened in 1984. “I was 17 and went into business with my brother and sister, funded by our parents. We always wanted to go into business, and there was a convenience store that went up for sale that we thought would be the right location.

“We actually expanded the first time up to five stores, and then I guess we grew too big too fast. I took over the business and brought it back down to one store before I started another expansion.”

The original site the family bought almost 29 years ago may be gone, but the foundation in convenience retailing for Seguin is not. He hit the jackpot with the Country Style coffee franchise he added in 2005, and has never looked back.

“I saw at that point the success of coffee sales in the convenience store and basically went on a mission to make a plan of adding convenience stores,” Seguin explains. “I was buying older convenience stores that were a little bit beat-up or under-maintained, and I brought in the concept of Lucky 13 and added Country Style coffee to each of the locations. It took about four and a half years to build up to where I am now.”

Seguin has extended his network to seven sites, including one that he has leased out to another owner. He says every location is different, and he has tried to keep or improve any programs in place when he got there, from a bait store in one location to a Sears depot in another.

Seguin has also stepped up his convenience retail game using his own signature foodservice program. “I have my own restaurants I’ve started called Mrs. Lips, and four of our sites are into food right now,” he says, adding that the program is named after his childhood nanny, whom Seguin and his siblings loved for her excellent cooking. “Some are more chip stand style open seasonally, and some are open year-round, depending on the need in that area.

“It’s difficult to survive just as a convenience store, so we’re trying to add another element to the business so we can bring in more customers. And in the food business, there’s simply better markup, so it helps us maintain our margins. Where we have the room and the market to support one of these restaurants, we’ve tried to implement it.”

He says he focuses on his own stores instead of worrying about the competition. “The world’s changing so fast that today you could be the best, and tomorrow someone can come up with a better idea. I’m never the best, I’m just forever trying to keep up with the trends. I always just try to be as good as I can with what I have.”

1. Do your research. Determine whether you have the capital to expand, and study the rules and regulations before you get started.

2. Hire the right staff. Look for experienced employees who are willing to help train and motivate other staff.

3. Consider foodservice. A foodservice franchise will make your store a destination, but only undertake a food program if you’re certain you have the infrastructure to sustain it.

4. Delve into technology. Look to digital tools like computerized POS systems and online ordering to help streamline your operations.

5. Customize for the community. Each location should be tailored to meet the demand of its customers, whether they look to you as the place to return beer bottles or apply for bait licences.