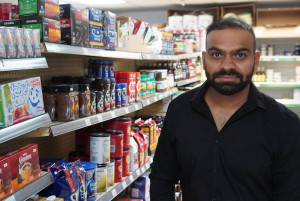 When Krunal Patel saw the for-sale ad for a rural P.E.I. convenience store, he saw an opportunity.

He has only owned Harvey's General Store in Crapaud for about two months, but he already has some big plans in motion, such as getting a liquor license.

“For me, it's a good opportunity to grow this business,” he said.

But he didn't buy just any store. Harvey's has long served the town of Crapaud as its go-to grocer and community hub. Former owner Aletha Harvey, who took over the store back in 1961, said many locals use it as a gathering spot every morning to kick off their days.

“They have a cup of coffee, then they go to work,” she said.

Over the years, Aletha hasn't seen much change to the business, which is located on Route 13 just off the Trans-Canada Highway, but it has always been bustling. The store stayed in the family when her son, Doug, took over and ran it for about 25 years before deciding the time was right to find a new owner.

Originally from India, Patel has a family background in this line of business, and he managed a store in Toronto before taking on this opportunity. The idea of running a community store in a small town appealed to him, so the Harveys have been helping him transition in as they transition out.

“Till he gets his feet on the ground and all that stuff,” Doug said.

Among Patel's proposed changes are a few renovations and adding a liquor section _ which would offer beverages such as beer and wine. While he hasn't secured a license with the province yet, Patel's hopeful about his application and has tons of support from the community, he said.

He believes selling liquor would allow him to better serve the region's locals, so they don't have to travel as far for it. As well, being right beside the highway means Harvey's already gets lots of customers travelling off the Confederation Bridge toward Charlottetown, which a liquor section would amplify, he said.

“It will draw more people in.”

Aside from the potential additions, Patel's main goal is to continue providing customers with whatever they might need, he said.

“Since I came to Canada, it was my dream that I buy a convenience store,” he said. “I'm trying my best to serve all the surrounding communities here.”

It's what Joanne Harvey likes best about the store. She can attest to how integral Harvey's is for the local population. In an area where everybody knows everybody, it's become a service that's only a phone call away if there's something people need.

“I think it is a lifeline for most people,” she said. “If you need us, call us.”