“We’re thrilled that our mission to provide payments choice, convenience and speed for all Canadians continues to be recognized through industry distinctions,” said Robert Hyde, CEO at Payment Source. “As payment preferences have been accelerated towards digital, our team is dedicated to providing alternative payment solutions that enable more equal opportunity for Canadians to engage in the economy to meet their daily needs.”

Commenting on the sixth annual Canadian Business Awards, awards coordinator, Steve Simpson, stated, “I am delighted to be a part of another successful run of the Canadian Business Awards program, and it has been a delight to liaise with all the winners of this year. I would like to congratulate them and wish them all the best for their future endeavours!” 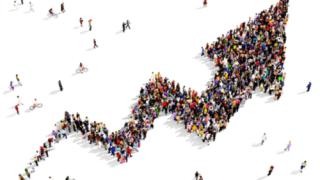 Retail sales rose 3.2% to $58.9 billion in January, even with public health restrictions in several parts of the country to deal with the Omicron surge in COVID-19 cases at the start of the year, Statistics Canada said Friday.

However, the agency said its early estimate for February suggested retail sales fell 0.5% for that month, though it cautioned the figure would be revised.

"Still, it looks like activity pulled back in February, likely with some diversion into services spending as restrictions loosened in that month," Kaushik wrote in a report.

"Overall, consumer demand remains robust, even as another month of strong inflation eroded some purchasing power."

Earlier this week, Statistics Canada said the annual inflation rate for February rose to 5.7% compared with a year-over-year rise in the consumer price index of 5.1% in January.

Statistics Canada said Friday retail sales were up in nine of the 11 subsectors it tracks.

The rise in January was led by an improvement at motor vehicle and parts dealers which gained 5.3% helped by a 5.5% increase at new car dealers and a 9.7% rise at used car dealers. Sales at gasoline stations were unchanged in January.

Sales at building material and garden equipment and supplies dealers gained 8.9%, while sales at food and beverage stores rose 2.2%. 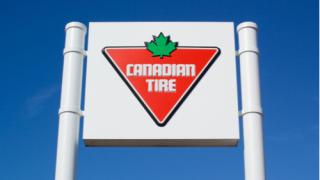 The company says the investment will help improve customer experience across its online and brick-and-mortar stores while growing its loyalty program.

Canadian Tire says it will also strengthen its supply chain fulfilment infrastructure and automation and modernize its information technology infrastructure.

The announcement was made as Canadian Tire kicked off its virtual investor day, where the company's leadership team are expected to provide further details on the plan.

"The future will belong to retailers who can provide the most seamless experience across digital and physical channels,'' Hicks said during his opening remarks Thursday.

"We'll create a seamless omnichannel experience that is unified across our portfolio of retail banners, products and services.'' 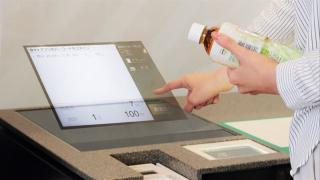 Demand for contactless shopping has surged during the coronavirus pandemic and these new holographic self-checkout kiosks tap into the trend, accepting only including credit cards, e-money cards and QR codes. Plus, they take up about 30% less space than existing cash registers, leaving more space for product displays.

"We are pleased and excited to see this initiative, where our technology is simplifying and enhancing the customer experience and making the interaction with the underlying device or system safer, more hygienic, and more convenient to use, which further emphasizes the importance of Neonode's contactless touch technology in the retail segment," said Urban Forssell, CEO of Neonode. 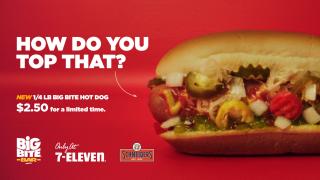 7-Eleven Canada is relaunching its Big Bite with a new 1/4 lbs hot dog from Schneiders and Big Bite Bar in its 600 branded stores.

The new Big Bite features a 100% all beef, all Canadian hot dog from Schneiders, a Canadian company founded in 1890. Big Bite fans will also have the option to customize their hot dog with more 13 toppings ranging from classic ketchup, mustard and relish to chili, nacho cheese, salsa, BBQ sauce, sauerkraut and more.

“At 7-Eleven Canada, our winning formula is combining convenience and a broad assortment to provide choice, customization and a bit of fun. And this is no exception for our Big Bite,” says Norman Hower, VP & GM of 7-Eleven Canada. “We know Canadians are going to love the taste of the new Big Bite and the ability to fully customize their hot dog at the Big Bite Bar.”

Big Bite is available 24/7 on the grill at 7-Eleven locations, both for in-store visitors and delivery.

Hershey puts "SHE" at the centre of Women's History Month in the U.S. 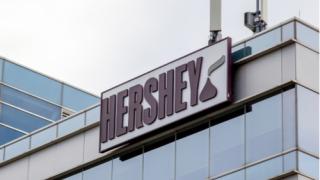 The Hershey Co. is celebrating the "SHE" at the centre of its milk chocolate bars as part of Women's History Month celebrations in the United States. The new Hershey's bar is a reminder to celebrate the impact that SHE makes, with limited-edition "Celebrate SHE" bars now available nationwide while supplies last.

"We are surrounded by women and girls that inspire us every single day. Creating this simple, but powerful and colourful change to our iconic milk chocolate bar serves as a reminder of how important they are in our lives," said Veronica Villasenor, vice president, U.S., The Hershey Co. "So grab a Hershey's bar, share one and celebrate all women and girls through a simple, and sweet, gesture."

To continue the celebration of "SHE," Hershey's is partnering with Girls on the Run, a nonprofit organization with a mission focused on supporting, empowering and inspiring girls to realize their limitless potential. As part of the partnership, Hershey's is donating $150,000 to Girls on the Run.

"For over 25 years, Girls on the Run has inspired girls and women to be confident and resilient while finding strength in connection with one another," said Elizabeth Kunz, CEO of Girls on the Run. "We are proud to partner with Hershey's Celebrate SHE campaign to shine a light on all the amazing SHEs in our lives!"

In addition to the work the Hershey's brand is doing through Celebrate SHE, The Hershey Co. was named No. 1 on the World's Top Female-Friendly Companies list by Forbes in 2021. It is among only a handful of Fortune 500 companies led by women. Hershey is committed to equal pay, career development and supporting impactful non-profit partners among other initiatives to support women.

Pennsylvania-based The Hershey Co. has more than 90 brands around the world that drive more than $8 billion in annual revenues, including brand names like Hershey's, Reese's, Kit Kat, Jolly Rancher, Ice Breakers, SkinnyPop and Pirate's Booty.