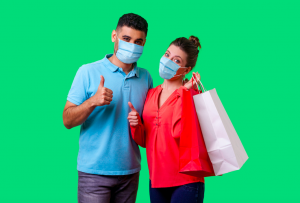 Customers hoping to get out of putting on a face mask to visit stores demanding they wear one, could be out of luck.

Experts agree with remarks Ontario Premier Doug Ford made on Friday, reminding Canadians that companies have the right to ask you to slip on a face covering or seek products and services elsewhere.

“Any business has the right to refuse anyone. That’s their business,” Ford said on a teleconference last week. “I highly highly encourage that people put on a face shield.”

He said he knows of two large grocery chains that have already adopted the “no mask, no service” policy meant to quell the spread of COVID-19.

The Canadian Press has been told by Longo’s and T&T supermarkets, Air Canada and Uber that shoppers, travellers and riders will be confronted with the mandatory policy at their stores and businesses.

Richard Powers, a University of Toronto associate professor with expertise in business law, said the policy is well within a company’s rights.

“The safety of retail workers and staff trumps the customers right to refuse wearing a mask,” he said.

“Businesses have a legal responsibility to create a safe working environment and if having people wear masks is a reasonable accommodation, which I think it is, to provide that safe environment, I believe that the retailer can refuse entry to someone who will not don a mask.”

City of Toronto spokesperson Diala Homaidan confirmed in an email that “no mask, no service” policies do not contravene any bylaws, but said such rules are not a requirement of business licensing and are left to the discretion of individual companies.

However, businesses that do implement such policies are likely to face concerns from Canadians with health conditions that are aggravated by masks.

Wearing a mask could contribute to an asthma attack for some, she said, while others with autism spectrum disorder may have trouble with sensory processing, as well as tactile, olfactory and nervous-system hypersensitivity that wearing a mask could trigger.

“Be very aware of those with different types of cognitive, intellectual disabilities, those who are hearing impaired and others,” Canada’s top health official said recently.

“Don’t assume that someone who isn’t wearing a mask or is wearing something different doesn’t have an actual reason for it,” chief public health officer Dr. Theresa Tam said.

Powers believes this is a sign some retailers could be in for a fight.

“Someone will challenge that on whatever grounds–discrimination perhaps–and that creates a hassle for the retailer and an expense, if they choose to fight it,” he said.

Adam Savaglio, a partner at business and employment law firm Scarfone Hawkins LLP, said the policy creates “a dance” for companies, especially because governments are advising them to take precautions to protect people from COVID-19.

“It can create a potential discrimination claim because one of the grounds in Ontario, at least under the Human Rights Code, where an individual may have a claim, is they’re being adversely treated on account of a protected ground, in this case, disability,” Savaglio said.

“They may have a personal right of action against the owner of that business for denial of service.”

That can be juxtaposed with health and safety legislation under the Occupational Health and Safety Act, which says companies have an obligation to protect its employees from all reasonable or forseeable risks of harm.

“That creates a competing rights issue,” he said. “Who triumphs if the individual refuses to adhere to the protocol?”