Buried in Ontario's budget bill are fines of up to $10,000 per day for gas station operators who don't display government-mandated stickers about the price of the carbon tax. 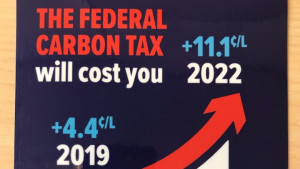 The budget contains a new piece of legislation called the Federal Carbon Tax Transparency Act that would require gas stations to display the sticker on each pump. The sticker shows the federal carbon tax adding 4.4 cents per litre to the price of gas now, rising to 11 cents a litre in 2022.

The legislation lets the government send inspectors to see if gas stations are properly displaying the stickers and sets out penalties for non-compliance.

"Not only is this a violation of freedom of speech, it will cost small business owners across the province who don't want to take part in this government propaganda campaign," McKenna said in a statement.

"This should be denounced by all political parties as a new low for our political discourse."

'We cannot accept this carbon tax'

The provincial Tories are slamming the federal carbon tax at every turn, and while Ford has said he is staying out of the upcoming federal election, he directly linked the two Friday in a speech to the Ontario General Contractors Association.

"When you go to the ballot box think of your future," he said. "Think of the country's future. Think of your children's future, because we cannot accept this carbon tax."

In response, the Ontario Convenience Stores Association said on Twitter: "Independent family run gas stations are more then happy to install the carbon tax sticker on all our pumps supporting Ford Nation in educating customers of the carbon tax download on all Ontarians. Let us know how to help?"

Energy Minister Greg Rickford's director of communications said the stickers are about transparency.

But critics note that the stickers don't mention carbon tax rebates.
The carbon tax is expected cost to a typical household $258 this year and $648 by 2022.


With files from Michelle Warren.