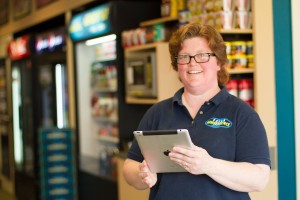 The Winter Olympics are here, and Canadians everywhere are looking to support their athletes in any way they can. Heather Gifford, manager of Falls Convenience in Niagara Falls, ON, has been supporting Team Canada by running the Pride & Joy consumer promotion from Mondelēz Canada in her store.

Consumers can download the Pride & Joy app on their mobile device, and every time Team Canada wins a medal, consumers have a chance to win, too. There are thousands of prizes to be won, including Team Canada mittens, Visa gift cards, and Mondelēz products.

Build on the hype

Canadian consumers are engaged when it comes to supporting their country during the Olympics. During the London Games, 80% of Canadians engaged through television coverage, and 55% of Canadians engaged online and on mobile devices [source: Charlton Strategic Research, Inc. (2012). PartnerMetrix: Focus on London 2012 – Olympic Sponsorship Impact].

“As far as the Canadian Olympic Team Games is concerned, anything associated with a brand of this calibre is a gold medal experience,” says Gifford. “Being able to get in on the ground floor of an exciting promotion like this is fun for everybody involved!”

App: Consumers can download the Pride & Joy app to get involved

Prizes: Over 5,000 prizes available, including a trip for two to the Men’s Gold Medal Ice Hockey game in Sochi, Russia

Charity: For every Pride & Joy app downloaded, Mondelēz Canada will donate $1 to the Canadian Olympic Foundation (up to $50,000)

Stay tuned to CCentral: At the end of the month, we'll follow up with Heather Gifford to see how successful the Pride & Joy promotion was in her store!