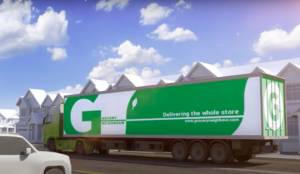 Some time in the next few months a tractor-trailer truck converted to a grocery store on wheels will start to visit neighbourhoods across Canada. And Grocery Neighbour CEO Frank Sinopoli believes that truck will be just the first of a new fleet of mobile grocery stores that could serve thousands of communities across North America.

“It was a direct result of the pandemic,” said Sinopoli of the idea for Grocery Neighbour. He believed massive change was coming to grocery shopping because of the COVID crisis and started working on the idea of a mobile grocery store in late March. “But if I’m being dead honest, I had no idea if it was even possible,” he said.

Now, 10 months later, the first truck is being completed, Sinopoli is fielding a steady stream of calls from interested franchisees (“In the last 24 hours alone, I’ve had seven franchise requests,” he said) and people are visiting the GroceryNeighbour.com site to vote to bring one of the new trucks to their neighbourhood.

The idea is straightforward: a tractor-trailer converted to a grocery aisle. With an automated checkout system, shoppers simply enter through one end, pick up what they want, scan it with their phone and leave through the other end.

The selection obviously won’t compare to a traditional grocery store, but the prices will be competitive, said Sinopoli. What will make it a success is the ability to take grocery retail into the many neighbourhoods and communities underserved by existing grocery retailers.

Grocery Neighbour trucks won’t be parking on streets in downtown Toronto, he said. Instead they’re looking at neighbourhoods where grocery stores will be a 10 or 15 minute drive away. “There’s thousands of neighbourhoods across North America that fit that profile,” he said.

Canadian Grocer spoke to Sinopoli to learn more about his plans for Grocery Neighbour. Here are edited excerpts from the interview. 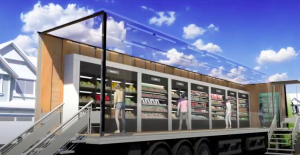 Product focus: “Our focus is going to be on fresh. We’re going to be local wherever we can,” he said. “I don’t know where to get a local avocado, so you can only be as local as you can be. But you’re going to find your breads, your cheeses, your meats, your produce. And then we’re gonna have a small section of traditional CPG, I don’t want to carry a ton but I also want to make sure we have what people want. The thing you’re not going to see likely is toilet paper, paper towel and detergent.”

Checkout: “You scan [products] with your phone,” he said. “You’re not interacting with the cashier or waiting in line. You’re doing it with your phone.” At Grocery Neighbour will be using a QR code-based system but they’re working on object recognition. “The next phase is you’ll just point your camera at the apple through object recognition and it’ll immediately identify it.”

Guarding against theft: There will be cameras in every store and because each customer is using the Grocery Neighbour checkout system they will be a registered user. “It’s not like there will be random people in the store. So we know who everybody is at any given moment, you can actually check the inventory, it does all the inventory in real time.”

How many trucks in the fleet? One right now– a “flagship store” that will be used to tour the country, raise awareness, test the model and iron out any wrinkles, said Sinopoli. “My personal five-year goal is 1,000,” he said. “For 2021, it’s about proving the model and perfecting it, our intentions are to have three stores in circulation by the end of 2021.”

Keeping Grocery Neighbour stocked: At first Grocery Neighbour is partnering with a distribution centre in Barrie, north of Toronto. But the plan will be to have mobile fulfillment, with trucks that take product to the mobile stores. “One unit can restock seven stores,’ said Sinopoli. “We’ll have a warehouse on wheels that will pick up from a DC once and then it will restock seven units.”

Becoming more than a novelty: “First and foremost, we’re not an ice cream shop, we’re not going to drive around aimlessly and hope that people wave us down,” said Sinopoli. “We created a voting system to get an understanding of all the people that actually like the idea, that they want it… we’re going to take that first unit around the country to visit the neighbourhoods that have said they want a Grocery Neighbour store, let them experience it, collect that data and then once we figure out if they liked the experience we then start deploying and dedicate them to neighbourhoods.”