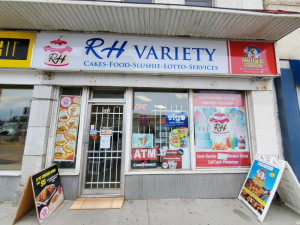 RH Variety is being celebrated by local Winnipeg business association

Every other day, Rey Jazmin finds his mind trapped underneath an avalanche.

It's a torrent of worries he believes few people can relate to. But as the owner of a new business, rapidly forced to become a one-man show after cost-cutting layoffs, Jazmin has had to learn how to deal with his anxieties at the same length of time he's been stuck beneath pandemic protocols.

“At least a landslide you can somewhat be prepared for,” he said in an interview with the Winnipeg Free Press. “The pandemic, on the other hand, no one saw coming - especially not me, who put my entire sweat and tears to get all of this running just a month before COVID-19 happened.”

Jazmin's still not sure RH Variety, the new convenience store and Filipino takeout restaurant he opened last year, is completely out of trouble. It's getting easier though, he said, to find himself smiling again when he opens his shop every day.

“It's hard, but this is the only way to financially support my family right now,” said Jazmin. “And now, I've started to look at it in sort of a positive way. Maybe, this will eventually be an opportunity for growth. Just maybe, very soon.”

Statistic after statistic makes one thing abundantly clear: It's not easy running a business during COVID-19.

Sixty storefronts in Winnipeg's West End, however, have not only stood tall against the pandemic, but they've done so as brand-new businesses in the city. Jazmin's is one of them.

That's why the association representing commerce in the neighbourhood is holding a weeklong event to celebrate those that have opened up since January 2020, with prizes and gift certificates up for grabs for anyone who visits them and all other stores in the area.

“Truly, all the odds were anything but in these businesses' favour and yet, they've survived against all of that,” said Joe Kornelsen, executive director for West End BIZ, in an interview.

“While older stores have also been hurting, they do have somewhat of a customer base that kept them afloat in some way. The new businesses barely had the time to establish themselves before this crisis,” he said. “I think that's more than worth celebrating, especially after they poured their heart and soul into their openings.”

Kornelsen said he's never seen more outlets close in the West End than during the pandemic. The association has kept track of statistics for at least five years, and 90 businesses closed in the area in 2020 - 51% higher than ever before.

“It's certainly affected the culture of the neighbourhood,” he said. “The West End has long been a home for newcomers to Canada, and so many of them start their first earnings by setting up a small family business with their fresh new ideas... the loss of that is very, very clear to anyone who comes here.”

Still, the opening of new shops like Jazmin's is a sign of hope, said Kornelsen. The figure for new openings from last year - 60 new grocery stores, restaurants, retailers and other startups- is only slightly below previous numbers.

“It's been much better than a lot of other neighbourhoods,” he said. “In so many ways, I think that's because the West End's a great way to get your start as a business owner. The lease rate is second-lowest in the city, costs are more affordable and it's a neighbourhood that actively likes participating in the economy.”

For Warkentin Business Solutions co-owners Vitaliy Lebezun and TJ Gross, that's something their new tax and bookkeeping service firm can relate to.

“It really goes without saying, I think we wouldn't have survived anything if it weren't for the support of people that live here,” said Gross.

“We've had a major shift, we moved online quicker than we planned to and the lockdowns certainly didn't make things easy, “ he said. “But I love working here in the area and I love what we're doing with our company. That makes things so much better, even with all this uncertainty.”

West End visitors and residents are invited to watch for decals popping up around the neighbourhood. The association's website will be in full swing throughout the week, featuring all the new businesses in the area. Participating customers will be entered in a draw and prizes include gift certificates to any West End outlet.