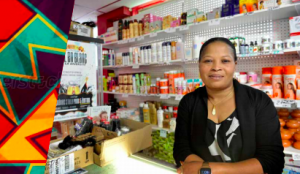 Quebec City convenience store owner Madeleine Zari-Doka comes by retail selling honestly. But the grit, courage and determination that have enabled her to build a three-store chain in Quebec’s picture-perfect provincial capital are all hers.

“I’ve been through a lot,” says Zari-Doka, speaking from her original Dépanneur Mokolo location, a basement convenience store also features imported foods, cosmetics and sundry items for the city’s small but growing population of African and Latino residents and students.  “But I’ve worked hard and I’m very proud of what I’ve accomplished.”

Born and raised in a large family in Baboua, a small town on the Central African Republic’s border with Cameroon, Zari-Doka grew up helping run the clothing stores and inns owned and operated by her entrepreneurial father.

“He taught us how to sell,” recalls Zari-Doka, a natural entrepreneur who, at age 12, opened a hair-braiding business.  “Even at school he got us to sell small items to our classmates.”

Later, while travelling to several countries under the auspices of the Lutheran World Federation, Zari-Doka ran afoul of one of the many rebel groups in the unwieldy central African nation, a former French colony that is one of the poorest countries on Earth. After being imprisoned for a month, she fled in 2003, leaving three young children behind.

She landed in Winnipeg, but continued to Quebec, where she worked at several jobs and completed a business course before securing a $15,000 loan in 2007 from the Canadian Youth Business Foundation. She planned to operate a hair salon, but that didn’t work out and she turned her attention to convenience.

“I decided to also get a permit to also sell the foods that Africans like but can’t get in supermarkets here,” says Zari-Doka, who adopted the moniker Mokolo because it means “big” in several indigenous African dialects and is the name of both a major city and a famous market in central Africa.

Dépanneur Mokolo opened in 2008 in the basement of a small building on a busy commercial street in Quebec City’s west end, close to the Laval University campus and the many African students who live and study there.  An Arabic grocery store later opened on the main floor above. 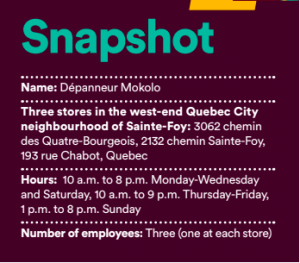 According to Zari-Doka, who works alone in the store that is open daily from 10 a.m. (except Sundays when it opens at 1 p.m. so that she can attend morning church services), the business grew thanks to word of mouth and her ongoing sponsorship of community events.

“It took a lot of time and patience,” says Zari-Doka, whose children joined her in Quebec City shortly after the store opened.  “I worked hard and concentrated on building people’s confidence. I’m here every day, rain, snow or shine.”

A welcome discovery, she adds, is the popularity of the store’s food items among the local Latino population.  "They eat the same foods Africans do. A large percentage of my customers now are non-Africans." 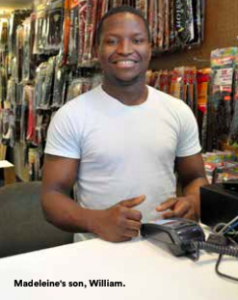 In 2014, Zari-Doka bought the inventory of a shuttered c-store and opened a second Mokolo, just a stone’s throw from the Laval University campus.  This ground-floor location features many of the same products as the original store, plus many regular North American c-store items, and is operated by her 22-year-old son William.

Two years ago, Zari-Doka bought another store and converted it to a third Mokolo location, which is run by her 25-year-old daughter Lydia-Annette, who has two kids of her own.

“Things are going very well,” said Zari-Doka, who now returns to the Central African Republic for several weeks during the summer months to visit her family (she travels incognito out of fear of being kidnapped by cash-hungry rebels).  “I really enjoy being of service to people.” 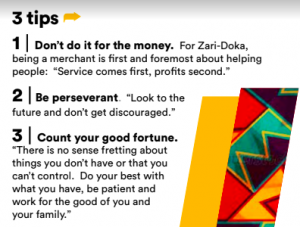 This article originally appeared in Sept/October issue of CSNC.