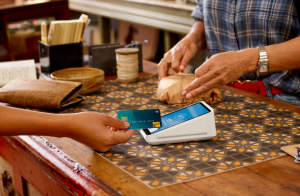 Canadian checkout counters could soon look quite different as a Silicon Valley giant looks to shake up the retail payment space - dominated by the ubiquitous grey terminal - with a new option introduced Thursday.

Square Inc., which started about a decade ago with a smartphone-based credit card scanner used mainly by small businesses, has launched a device in Canada aimed at disrupting a market of larger retailers dominated by Canadian banks.

Square's white plastic device, called the Terminal, replaces the physical keypad design with a glass touch screen that it says allows for more clarity at checkout with a variety of display options, such as a full breakdown of the bill.

Jesse Dorogusker, head of hardware at Square, said the portable device with a built-in receipt printer and 'all day' battery life is also easily updated to take advantage of the company's latest software offerings, unlike some of the more limited designs commonly found at the checkout.

The company hopes to see quick adoption of its device from new companies, but noted that many existing merchants are already tied to multi-year contracts, Dorogusker said.

"For some, we have to wait them out. Honestly, it's an unfair contract they got locked into and they're checking the days and doing the math.''

To help encourage adoption of Square's Terminal, which first launched late last year in the U.S., the company has offered substantial discounts on the hardware to sell the devices below cost.

Square is also touting its straightforward transaction rates for the device of 2.65% for credit card payments and 10 cents for every debit payment, without the contracts and what it calls opaque pricing offered by Canadian banks.

The Canadian payment space is dominated by Moneris Solutions Corp., Canada's largest payments card processor, and owned by Royal Bank of Canada and Bank of Montreal.

Square's Terminal rollout comes as a number of retail service providers are fighting to capitalize on a rapid blurring of lines between online and bricks-and-mortar retailers.

Ottawa-based Shopify Inc., which started as a platform to make it easier to create online stores, has been pushing more into physical stores with an expanded suite of hardware offerings, including a simplified payment card scanner and tablet-based checkout device announced in April.

The company is pushing for more of an omnichannel offering as merchants find it increasingly important to serve both walk-in and online customers, said Square CEO Jack Dorsey.

"It's about making sure that independent of the channel, the seller makes the sale,'' he said. "Where their customers originate from is becoming less and less of a thing that matters.''

"There's certainly direct competition with a lot of our peers,'' he said, adding that as competition increases, Square plans to distinguish itself through its wide array of software offerings, including payroll and capital management tools.

Square will also have to compete with incumbents who are cautiously, but steadily moving forward in the hardware space.

Moneris launched a new suite of devices in April that have 3.5-inch touch colour screens while still keeping a physical keypad, and in 2017 launched a mobile device aimed at smaller merchants.

The company also rolled out new retailing software in April, noting that the consistent navigation of the devices means it will be easier to train staff and ensure smooth transactions.