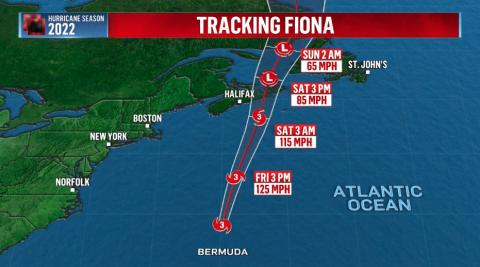 CTV's live tracking of Hurricane Fiona as it makes its way to Canada's East Coast.

Powerful winds and much as 200 millimetres of rain is forecast to fall on Atlantic Canada and eastern Quebec, staring today through the weekend.

As hurricane Fiona tracks towards the East Coast, it's expected to reach Nova Scotia waters by Friday night, then pass through the eastern mainland part of the province, Cape Breton and Prince Edward Island on Saturday, and on to Quebec's Lower North Shore and southeastern Labrador early Sunday.

In addition to significant storm surge, potential for flooding in coastal and mainland areas and an "all-time'' low pressure across the region, the potentially "historic'' storm is expected to cause widespread power outages due to trees and hydro poles brought down by powerful wind, according to The Canadian Press.

Environment Canada meteorologist Bob Robichaud said during a news conference on Thursday that it remains to be seen if Fiona's wind gusts will set records, but the expectation is that gusts will be stronger in some areas than the 150 km/h winds felt when post-tropical storm Dorian made landfall in 2019.

The Canadian Hurricane Centre in Dartmouth, N.S., said the forecast was for the worst gusts to hit eastern Nova Scotia, Cape Breton and parts of Prince Edward Island.

Coastal areas of Nova Scotia and Newfoundland are expected to experience pounding surf, with waves off Nova Scotia expected to build to more than 10 metres, while wave heights could be more than 12 metres in eastern parts of the Gulf of St. Lawrence. 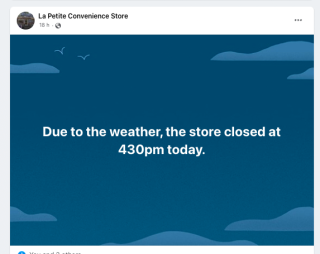 Convenience and gas operators are bracing for the storm, while helping their communities prepare.

Big Dog Convenience, which has five stores in PEI, announced on social media Friday that "All Big Dog store locations will be open today for all of your convenience needs."

McNeill's Shell in Elmsdale, NS, is encouraging people to take care while stocking up on snack and lunch supplies: "Be safe everyone!!"

Masstown Market in Derber, NS, announced it would be closed on Saturday in anticipation of the storm, however Masstown Petro-Canada will remain open: "Stock up today and stay safe tomorrow!"

Nova Scotias Emergency Management Office (NSEMO) is sharing advice on how to minimize the risk of property damage and personal injury ahead of  strong winds, heavy rain and storm surges that could cause power outages, flooding and significant damage.

“Being prepared is the best thing we can do in a storm,” said Municipal Affairs and Housing Minister John Lohr, also Minister responsible for the Emergency Management Office. “With Fiona heading our way, it’s important to take steps to prepare before the storm hits. Working together, we can weather the storm.”

People are being advised to monitor local weather forecasts and be ready for the storm’s arrival. The basic checklist includes: