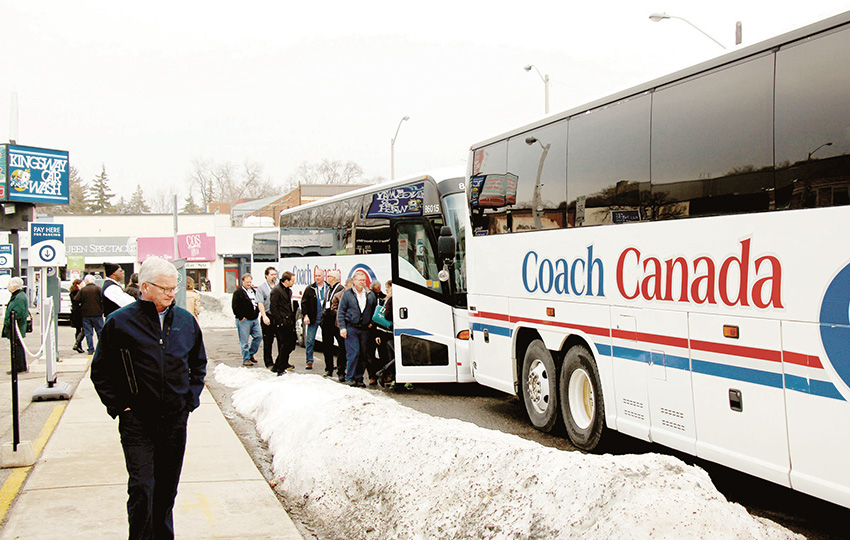 First stop was Kingsway Car Wash, 3005 Bloor Street West in Etobicoke. This site has kept pace with trends by working a simple premise – service. The location offers a detailing centre with three bays and a tunnel wash.

“At one time the detailing centre was just 5% to 10% of our business. Now its about 25%,” says operator Dominic DiMonte, one of the family members that continue the business that was started by Donato DiMonte in 1978. He comments that they are challenged by the lack of space at the site that has been running since the 50s. In fact, Donato DiMonte worked at the car wash in 1951, a time when there were not so many people and businesses surrounding the facility. 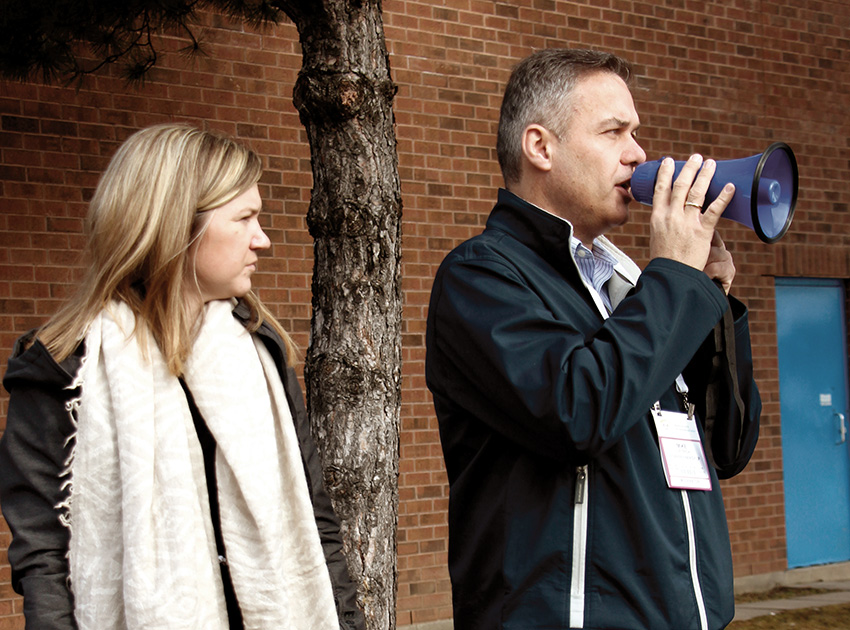 “The old model of full service has changed a lot over the years. We have found that our customers continue to look for the older style of hands-on personal service we offer,” he says, stating that business has never been better.

The DiMontes, Dominic and Sergio, operate the Kingsway site as well as locations at Dufferin and Dupont, Dundas Street West and a new coin op on Albion Road in Etobicoke.

The Valet Car Wash, 655 Queensway East, Mississauga, was next up on the tour with busses pulling into the lot at 10:00 am. Owned by Ivan and Bill Barber as well as Mike Black, the centre offers a full slate footprint that includes a c-store, Petro-Canada gas station as well as lube centre and auto repair bays in addition to self-service bays, express detailing bays and tunnel. Inside Valet the space is vast with crew carts stocked with cleaning products and staff actively working vacuums and wiper cloths. 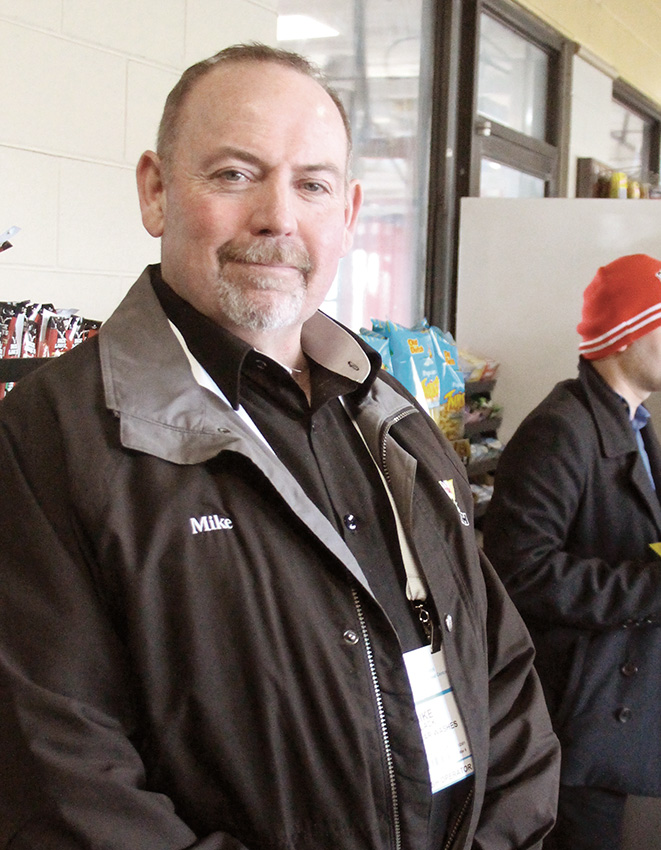 In 2012, after a detailed customer survey, the operators elected to move from a full-service car wash to a flex model that offered a full range of services. The new model included an exterior-only fast pay lane with an ICS gated pay station. The idea was to increase customer thru-put. The group worked with Sonny’s Car Wash Equipment (Wash Links) to eliminate all vehicle prepping and get rid of exit hand drying. The new efficiency allowed the operators to reduce costs, something they passed along to customers in the form of a lower exterior base price. The improved system also allowed them to obtain a premium for their best-in-class top end washes.

“Training and product consistency is certainly a challenge we work with everyday,” says Valet Car Wash partner Mike Black. He reports the centre uses the services of 35 staff that are schooled in the standards that have made Valet a local favourite. “Our customers want price, speed and quality and we have been steadily making changes to give them just this.”

Indeed, the interior services were moved to the exit of the car wash with the addition of six new basic cleaning positions. This proved to be a good move that simplified the service, but the group saw that more was needed. In January of 2013 they renamed their facility from Mississauga Kar Kare Centre to Valet Car Wash. Since then, business has seen month-over-month gains in customer volume and total car counts up by 150%. Today the site sees some 800 vehicles every day and they report that thanks to the increase in exterior volumes, they have greatly increased the number of interior and extra service sales and seen a drop in staffing cohort. 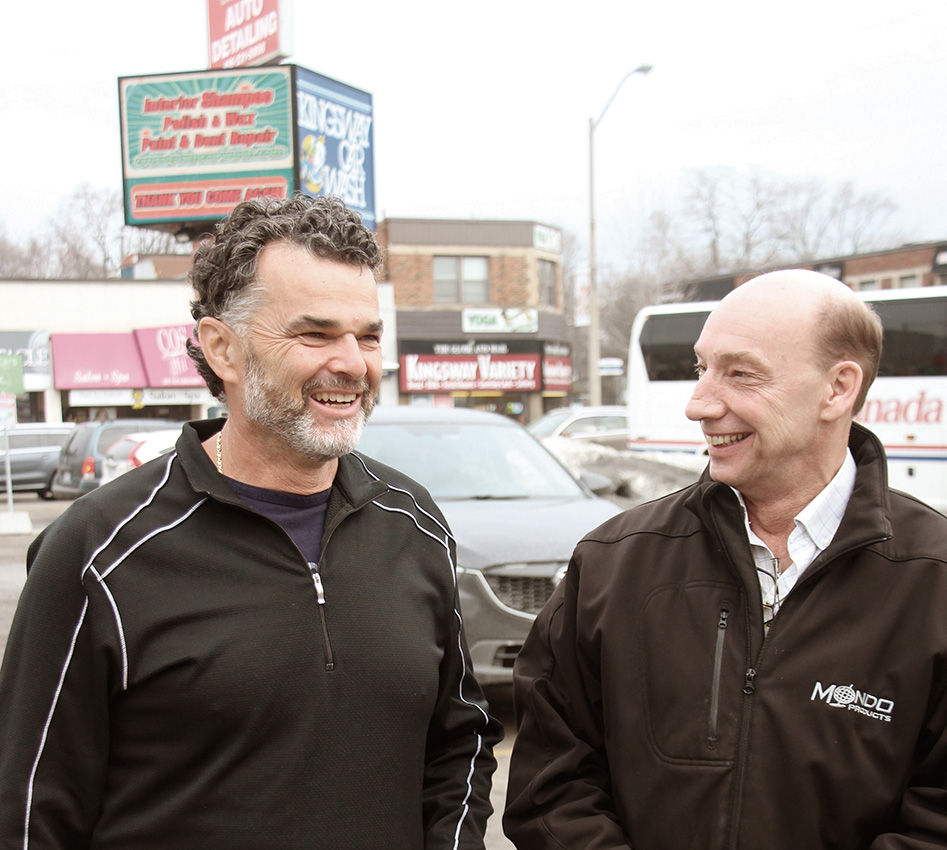 At 11:00 the motorcade of busses rolled up to the Pioneer station at 3015 Thomas Street, Mississauga. Operated by Parkland Fuel Corporation, the site was newly built in 2012 with automatic car wash, 1,100-square-foot Verve c-store and Pioneer forecourt. And, when it comes to the car wash/gas station marriage, Pioneer is just that – a pioneer. The company was among the first in Ontario to install conveyorised tunnels with seven Ontario sites similar to this one.

Pioneer’s Thomas Street location features Mondo-installed equipment from Belanger. Mondo also supplies the chemicals. Systems are controlled by Kesseltronics r-TC equipment that allows things like boilers and gate eyes to run more efficiently. “We have used technology to mitigate costs,” says Mike Dietrich, Manager of Carwash Operations and Facilities Maintenance, Pioneer Petroleums. He reports that the dryers at the location were adapted to comply with municipal bylaws that sought to reduce noise to nearby new homes. “There were a number of municipal issues from the lights in the forecourt to the water to the loudness of the dryers. We had to deal with them all and we learned much,” he says adding that the tunnel handles 75 to 120 cars per hour. More, he suggests that it is important for operators to pay attention to the conversation at the pump. “We find about an 8% conversion rate from gas to wash with about one wash per 400 liters of gas sold,” he says.

Greater efficiency is key. Improving efficiency allowed Valet to reduce costs, something they passed along to customers in the form of a lower exterior base price. The improved system also allowed them to obtain a premium for their best-in-class top end washes. Business has seen month-over-month gains in customer volume and total car counts up by 150%.

Pay attention to the conversation at the pump. Pioneer has listened and is working to build its 8% fuel to car wash conversion rate.