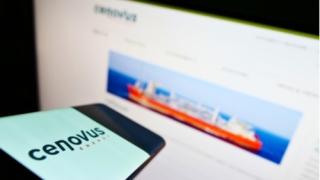 CALGARY - Cenovus Energy Inc. retired nearly $1 billion in debt in the second quarter as the easing of COVID-19 restrictions and a related commodity price surge provided a lift to Canadian oil and gas producers.

The Calgary-based oil producer said Thursday it expects to meet its interim net debt target of $10 billion by the end of this year, assuming current commodity prices and foreign exchange rates hold. Cenovus' net debt at the end of the second quarter was $12.4 billion, compared with $13.3 billion as of March 31.

"We expect an accelerated pace of deleveraging in the third quarter and through the back half of the year,'' said Cenovus chief executive Alex Pourbaix on a conference call with analysts. "Once we're in range of that $10 billion mark, there will be room to consider other forms of capital allocation, including increasing shareholder returns.''

Cenovus, like many other Canadian energy companies, has been focusing on cutting costs and reducing debt after the pandemic-related energy market volatility of 2020. But with energy prices on the rebound as global economies reopen and travel resumes, companies like Cenovus are suddenly awash in cash.

Cenovus reported Thursday free cash flow of $1.3 billion as its total production reached 765,900 barrels of oil equivalent per day, up 65 per cent from 465,400 boe/d in the prior year period.

Cenovus also said it is on pace to realize at least $1 billion in synergies in 2021. The company's $3.8-billion acquisition of Husky Energy was finalized earlier this year.

On Wednesday, the benchmark West Texas Intermediate crude price closed at US$72.39 a barrel, up from the low $30s in April 2020. Recent prices have been higher than the Canadian oilpatch has seen in seven years, and that has been driving increased activity across the sector.

The Petroleum Services Association of Canada (PSAC) revised its forecast Thursday for the number of wells that will be drilled in Canada for 2021 to 4,250 wells, up from the 3,600 it forecast in April of this year.

PSAC president and chief executive Gurpreet Lail said fiscal discipline and paying down debt is still the order of the day, but companies are starting to revise their capital expenditure budgets for the second half of the year.

"We can't be sure we've seen the end of lockdowns from the pandemic, but cautious optimism is definitely in the air,'' Lail said.

Lail added as the economy improves, inflation will become more of a concern, and shortages of everything from steel, to chemicals, to pickup trucks and raw materials from overseas are already hitting oil and gas producers and service companies.

In addition, labour shortages have been identified as a problem, with some companies reporting difficulties attracting workers back to the industry in the wake of the COVID-19 pandemic.

"While companies are eager to stand up equipment that has been sitting idle in order to meet demand, undermanned crews will constrain their ability to do so, already resulting in some work being turned down or postponed,'' Lail said.

PSAC is forecasting the WTI benchmark crude price will average US$64.00 per barrel for 2021.