The Convenience Industry Council of Canada and its members gathered at the King Edward in Toronto on November 23 to connect, celebrate and honour the industry's Frontline Heroes Awards winners.

The program celebrates the efforts of ordinary individuals from coast to coast to coast, who went beyond the regular call of duty to make an extraordinary impact on their community during the pandemic. 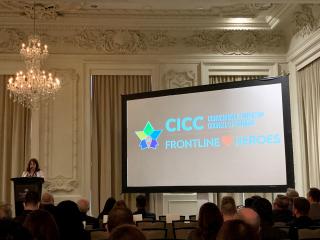 "I’m so proud of how our industry was able to pivot and serve our communities. These winners and their stories exemplify how we are essential in tough times and convenient in good times – more importantly, how we are community," CICC president and CEO, Anne Kothawala said during the presentation. "There are certainly many frontline heroes that stepped up: healthcare workers, long term care workers, emergency services, to name just a few. But these are all heroes whose professions come with specialized training. What sets our frontline heroes apart, in my view, was their natural instinct to step up, without the same kind of crisis, and just do what was necessary to help their customers and their communities."

Kothawala acknowledged that many of those in the room had the "relative luxury" to work from home during the heigh of the pandemic, but the heroes were those who put themselves out there day after day, going above and beyond to support people in their communities.

Here are their stories, as told by the CICC:

British Columbia was hit especially hard this past year, not only with COVID, but devastating forest fires and a raging heat wave that devastated many communities in the province’s interior, and now of course, with the floods. This Frontline Hero from works for Core-Mark and definitely went that extra mile during this difficult time. In fact, Clarke logged thousands of extra miles over a two-week period as he traded in his dress shoes for work boots and got behind the wheel of a truck for three weeks straight, delivering essential products like water, whose demand spiked three times literally overnight. As the business development manager for Core-Mark B.C., this individual didn’t think twice about putting in those long hours. He knew that he needed to do whatever it took to ensure products reached their destination. Doing whatever it took meant sleepless nights and battling temperate of more than 45 Celsius. He literally was worked off his feet – his efforts eventually led to the destruction of his 10-year-old safety boots. Clarke is an example of resiliency, courage, kindness and sacrifice. He is a Frontline Hero who went above and beyond to serve his community.

During the pandemic, retailers saw an increase in the incidences of theft, which is not surprising because those in need were especially impacted by the lockdowns. In the early stages of COVID, an Abbotsford man who used the local Petro-Canada as a frequent hangout was caught stealing by one of the employees, Anita Wilson. When confronted, the man said he had no other choice because he was hungry. That employee didn’t call the police, nor did she ask him to leave the store and never come back. What she did do was use her own money to buy him a sandwich and a drink and let him eat it on the premises. That night inspired Wilson to go out and buy a collection of small items as well as food that she and her team would hand out whenever they saw someone that was in need. She didn’t stop there. Further into the pandemic, at a time many of her colleagues were feeling the stressful effects of the pandemic, Wilson went out and purchased "goodie-bags" filled with stress-relieving food and beverages and secretly put them in the offices of 11 managers in her area.Video surveillance footage finally caught this Secret Santa and in an effort to pay her back, they surprised her with her own bag of goodies. In the words of her nominator, “This was a really feel-good moment for all of us. At a time when we were all keeping our distance, it actually made us all closer.”

The pandemic exacerbated the financial situation for many people in Toronto resulting in food bank use in the city reaching an all-time high.When Petro-Canada provided $10,000 to each store manager to invest in their communities, Sam Singh matched that amount, donating $20,000 to help the North York Harvest Foodbank. That’s just one example of Singh’s kindness. He considers his entire staff his family and is willing to help out whenever required including financing the expensive and difficult immigration process for many employees. On average, Singh pays for five employees a year, but this year, due to the pandemic and the unprecedented need, he supported 18 employees. Thanks to Singh’s kindness, they are now on their way to a better life. In the words of Singh’s nominator, “Sam’s kindness is difficult to fit in 250 words, so I have selected only a few of the many, many stories.” Singh’s generosity goes beyond the pandemic. He feels blessed to live in Canada and wants to give back as much as possible including visiting his extended family of retired employees frequently and helping each out financially whenever possible.

These heroes have a great sense of community spirit and believe in paying it forward. Based in Vaughan, they operate 11 sites for Husky Energy. As frontline workers themselves, the duo wanted to ensure that the healthcare workers who were working day and night, stayed healthy. They provided lunch for 50 workers at the senior’s care centre, Home Instead in Etobicoke, and another 160 butter chicken lunches for 160 staff at the Stevenson Memorial Hospital in Alliston. According to the hospital: “Several of the staff said that was the best butter chicken they have ever had. That was a great lunch. I truly hope they are well thanked for thoughtfully supplying it for us. Thank you."

Going above and beyond to serve the community 24/7, 365. That’s exactly what Tim Lamirante demonstrated throughout the pandemic. The local MacEwen station in north-eastern Ontario’s small town of Mattawa is truly representative of where convenience and communities come together.  Imagine giving your personal cell number to first responders to ensure that if there’s an emergency after hours, that they had a lifeline. That’s taking essential to the extreme. But Lamirante never thought twice. One night, paramedics had an extremely busy night and logging lots of kilometres and were low on fuel. Lamirante got the call, went and opened up the station to let the paramedics fuel up the ambulance but themselves as well. This became a common occurrence for Lamirante during the pandemic as he found himself opening the store to ensure health care workers who were making long commutes had enough fuel after their long shifts to make the long commute home.

“Ca va bien aller” - It’s going to be ok. That was the message Eric Labranche adopted as his personal mantra during the pandemic. In fact, the operator of the Voisin store had both rainbow-coloured flags and stickers printed with that message on it and sold them at his store with the $2,000 in proceeds going to charity. But Labranche didn’t stop there. He approached local businesses in his region with an idea of creating a fundraiser for local charity through the sale of food drive bags. That raised another $10,000 in proceeds that was split between the Centre Roland-Bertrand in Shawinigan and the Artisans de Paix in Trois-Rivières. In total, Labranche’s efforts helped out 800 families in need. Labranche has also kept his doors open 24/7 in order to meet the needs of essential frontline workers who were also working around the clock. A special moment for Labranche, who always wants to get involved and give back to his community, came last June during graduation ceremonies at his old school. To ensure the graduating students did have the opportunity to have the event, Labranche’s store workers acted as volunteers at the door, ensuring sanitary measures were met and he even donated on-floor stickers to ensure adequate social distancing among participants.

Oxford, N.S. may be known as the wild blueberry capital of Canada, but it’s also recognized for its great community spirit, thanks to the owner of a local Circle K. Kim Miers and her staff are consummate fundraisers in the community. They fundraise independently all year long to support numerous organizations in Cumberland County, including seniors’ homes, local sports teams to helping individuals in times of difficulties. She started her own online auction on Facebook, My Junk is Your Treasure with proceeds going to local charities. Items that are donated showcased on the Facebook page with a starting bid of usually $1. People have an opportunity to comment/bid on the item for five days before the auction is closed. Miers and her team are likely best known for their annual Christmas party for local children where Santa stops by and hands out goody bags to the kids. It is this ongoing commitment to the community that makes Miers a well-deserved Frontline Hero in Atlantic Canada.

In addition to the seven Frontline Heroes Awards, CICC handed out a special award to Wallace & Carey, recognizing the distribution company's 100th birthday and its special place in the heart of the convenience industry. Jackie Bellerose, EVP, people services, accepted the award on behalf of the company: "I really appreciate CICC honouring us tonight."

Congratulations to all the honourees!

As part of the event, the CICC named the CIA winners, which were selected by a judging panel that included members of the CICC Board of Directors and senior executives from the group's retail and distributor members.

And the winners are: