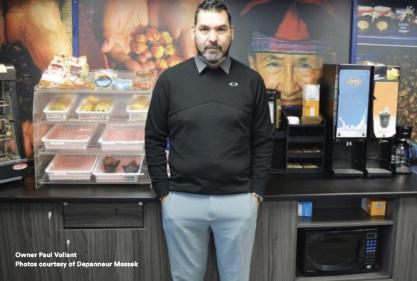 Paul Vollant has a lot to be proud of.

As the owner of Dépanneur Messek, a bustling convenience store in the Innu community of Pessamit on Quebec’s rugged North Shore, he is one of a handful of successful retailers on the First Nations reserve.

As a former band council member and Hockey Canada-trained coach (whose son was recently drafted by a top team in the Quebec Major Junior Hockey League), Vollant is a well-known and respected member of the tightly knit collective of about 3,200.

But Vollant isn’t sitting on his laurels—au contraire.  The 45-year-old continues to work hard to achieve further success for his family’s business and to help improve life in the community. 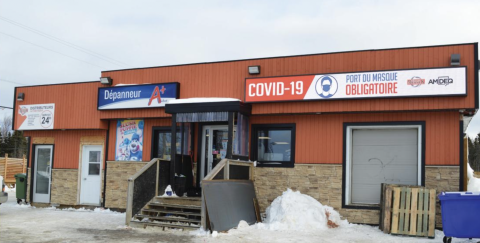 A digital banner helps keep the community in the loop.

Another new addition is an M&M Food Market Express freezer—the first in Pessamit—that is now stocked with 75 frozen food products. “We hope and believe it will prove super popular here,” says Vollant.

The renovations are a follow up to a major makeover in 2017 that doubled the c-store’s retail floor space and added a storage room, as well as a standalone room with a street entrance.

This standalone room is open 24/7 and is equipped with two automated teller machines, a pop machine and a vending machine that sells sundry items like chips, chocolate bars, peanuts and rechargeable batteries.

The service—a novelty on the reserve—has proven popular from the get go. “It was a way for us to roll 24 hours a day,” says Vollant. “We always try to be visionary.”

Innovation has been the hallmark of the business since Vollant’s mother, Marianne, founded the store in 1991.

Located on the rue Messek (or Sod Street), next to Pessamit’s high school, it’s one of four convenience stores on the reserve, which is a half-hour’s drive west of Baie-Comeau, a city that serves as a commercial hub for the region. Dépanneur Messek distinguishes itself, Vollant says, with professional and courteous customer service and full lines of the most popular c-store items, including food, snacks, beer, tobacco products and lottery tickets.

The store also became the first to offer home delivery, a service that a teenaged Vollant provided when his mom owned the business and a service that continues today.

Vollant and his wife Christiane Riverin, who live right next door, bought the business in 2006 and have continued to build and expand products and offerings, en route to a tripling of revenues.

A big part of sales now come from the popular ready-to-eat foods, including baked goods, breakfast sandwiches and salads, which are made fresh by a cook who comes in weekday mornings at 6 a.m.

Menu items and special promotions, like the annual Christmas draw, are advertised via a 19-foot, banner-shaped digital outdoor sign on the front of the store.

The store also maintains an active presence on social media, thanks to tech-savvy manager, Jérôme Labbé.  Labbé also manages the 12 employees who staff operations from 7 a.m. to midnight seven days a week.

According to Vollant, the COVID-19 restrictions and shutdowns last spring resulted in a short-term boom in business, as people stuck close to their community.

Sales got an added boost in May, when he and Riverin opened a seasonal restaurant next to the store. Dubbed Cantine Hoffie—a play on the name of their 15-year-old daughter, Anne-Sophie—it stands on the same spot where a decade ago the couple briefly operated another fast-food restaurant. Vollant says he contributes about $25,000 a year in cash or in-kind donations to community groups, particularly recreational and minor league hockey teams that play in the arena next to the store.

“We’re trying to help people, particularly our youth, to keep moving and stay in good health,” says Vollant, who has travelled extensively because of hockey and the prowess of his son Paul-Edward, a 17-year-old defenceman who was drafted by theVal-d'Or Foreurs in 2019.

Travelling has helped the c-store operator see and discover new retail products, services and ways of doing things that have helped to make his own business better.

“You need to see what’s going on elsewhere, so you see and introduce things here that you think your customers will want and need,” he says. “And you have to always offer great customer service to keep people coming back.”

1. Friendliness first.  Paul Vollant puts a premium on smiles, especially in small community like Pessamit. “A friendly welcome is crucial. When we hire new people we tell them to serve customers the way they’d like to be served.”

2. Embrace progress. “Never stop developing new ideas or introducing new concepts or products or services that your customers will appreciate.”

3. Invest in community.  “We feel a real need and responsibility to sponsor sports teams and community activities that help to get and keep people moving.”

4. Vending success.Vending machines that sell everything from snacks to essentials are a smart way for independent operators to meet the needs of customers 24/7.

This article originally appeared in the March/April 2021 issue.