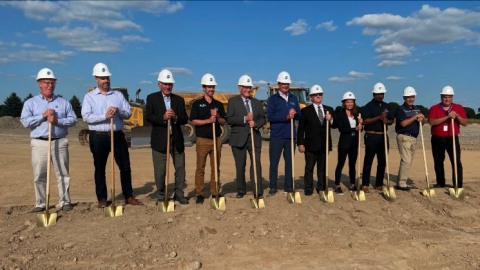 Dot, the largest food industry redistributor in North America, previously announced it was to investing CDN $50 million in the new 168,875 sq.-ft. facility, which will be located at 100 Ken McKee St., near Highway 401 in the community east of London.

“We are very strategic in determining the best place to build a new facility,”  John Tracy, executive chairman of Dot Foods Canada, said in a release. His parents, Robert (RT) and Dorothy Tracy, founded the company.  “Ingersoll is a great location for us because of the workforce available here and the space available to support our future growth. We’re excited about the careers we have to offer and about the people who will join our Dot Foods Canada family. There’s a lot of opportunity for our distribution model in Canada, and we look forward to better serving our current customers and reaching new ones with the establishment of this distribution centre”

Dot entered the Canadian market in 2016, with the purchase of Canadian food redistributor Marketwest, soon opening distribution centres in Calgary and Brampton, Ont.

When the new Ingersoll facility is complete in spring 2023, it will replace the currently leased Brampton location. Dot says it has offered positions at the new facility to all Brampton employees.

In addition, Dot expects to hire 200 employees from Ingersoll and surrounding areas in the next three to five years. These positions will largely be for warehouse workers and truck drivers, with some office and administrative roles.

Phase one of the Ingersoll distribution centre will include offices and dry, refrigerated, and frozen warehouse space. There is room to expand the distribution centre. Eventually, Dot will also add on-site garage facilities to support the Dot Transportation Canada, Inc., fleet.

As part of its introduction to the community, Dot Canada kicked off a $50,000 charitable giving program that supports five area non-profit organizations.

These five recipient groups were selected by Dot for their close alignment with the company’s charitable areas of focus: Fighting hunger. The Alzheimer’s Society is another cause close to Dot’s heart, as RT Tracy battled the disease.

“This is part of our commitment to being a good neighbour,” Tracy explained. “My parents felt strongly that our company has a responsibility to do our part to support the community we call home. This is where our employees will live and work, so it’s important that we invest in the groups that are doing the important work of caring for this community. This is just the start. We look forward to supporting many more groups in the region with time, talent, and treasure as we get our Ingersoll facility up and running.”

Founded in 1960 and headquartered in Mt. Sterling, Illinois, Dot Foods serves more than 55 countries with a product offering of 125,000 items from 1,020 food manufacturers. In Canada, Dot distributes 3,300 Canadian and American products for more than 275 Canadian distribution points.