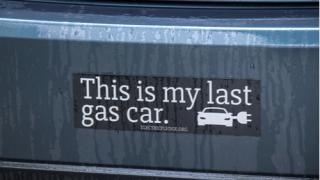 CHARLOTTETOWN, P.E.I. - A new incentive from the P.E.I. government offering financial aid to Islanders who invest in an electric vehicle has been going smooth so far, but it can still be costly.

Last April, the P.E.I. government announced the Universal Electric Vehicle (EV) Incentive - providing up to $5,000 to Islanders who purchase a new or used EV.

Islanders who use the program also get a free Level 2 charger. However, they are also responsible for any installation costs. The offer is also limited to one charger per household.

The incentives apply to owners of battery electric vehicles, (BEV) as well as plug-in hybrid cars, (PHEV) and used EVs. The vehicle must also be purchased from a licensed Island car dealership in order to be considered eligible. Incentives are administered at the point of sale and applied directly to the bill of sale or lease agreement.

Blake Doyle bought his first EV in 2016, before the provincial incentives. He ordered his first vehicle online. The second vehicle he registered through an Island dealership, but it had to be shipped from California.

"P.E.I. has certainly seen an increase in EVs and that creates a real challenge for dealers to access them,'' Doyle told SaltWire Network during an interview on Aug. 17.

Doyle installed his own Level 2 charger which was a costly endeavour.

The charger outputs 220 volts of electricity, about the same as a common dryer plug. This is considerably more power to run from your home to a charging location, said Doyle.

"The cables are expensive, the labour is expensive and some people's (electric) panels might not be able to accommodate the extra energy load," he said.

The incentives are a step in the right direction, but if it is asking people to switch to electric, it will take more work, he added.

Multiple chargers are needed in public areas and need to be spread out to accommodate people just looking for a top-up.

"The question is, is our province capable of being sufficient and being leaders in this revolution. As opposed to just adding charging stations, increased availability is what is needed. There has to be more capacity for charging and not just one station,'' said Doyle.

Derek Ellis, director of sustainability for the department of Environment, Energy and Climate Action told SaltWire Network on Aug. 17 one of the biggest issues now is supply and demand.

"The take-home for me is there is a lot more demand than expected when we launched. I was pleasantly surprised by the number of applications we had,'' said Ellis.

This marks a big increase in just two years. As a result, it is becoming difficult to get EVs to the Island, causing prices to increase.

The incentive covers a portion of this cost but does not cover the charger installation fees because of how much they can vary depending on the customer.

"The price (of installation) varies depending on if you have a dryer plug in your garage, to over $1,000 or more if you have a trench-in wiring on your driveway,'' said Ellis. "Given that varies dramatically, we decided to supply them for free and leave the rest to the client.''

There have also been concerns expressed from some Islanders about the lithium batteries many EVs use, as they are difficult to recycle.

"That is a criticism I've heard, depending on where you live, there is some merit to it, in other places, not so much,'' said Ellis.

Currently, the province has no recycling program in place for EV batteries, an issue that needs to be addressed if the future of the industry is to succeed, he added.

"There have been discussions, we recognize that as part of the transition, not just in P.E.I., but other regions as well. We will need a recycling industry to develop in parallel to the EV industry here in order to make this a sustainable practice over the long term.''