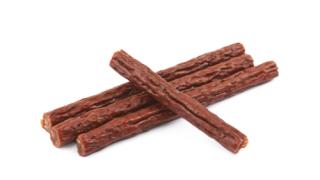 Inflation is threatening to slow growth categories in c-stores, as shoppers face rising prices with no end in sight.

According to Statistics Canada, the country’s inflation rate reached a 30-year high of 5.7% in February, its highest level since August 1991.

But Canadian manufacturers of meat snacks are hoping to maintain their status as a top performer for c-stores, despite price pressure from the rise in beef, freight and other expenses.

“We are one of the few categories that has grown significantly over the last 10-plus years, with year-over-year growth in the double digits,” says Curtis Davison, VP and general manager of Canada, for Jack Link’s Protein Snacks in Aurora, Ont.

“With their two largest categories, tobacco and gas, in decline, it’s become more important for our category in convenience stores to continue to grow,” he says.

To that end, Jack Link’s recent “pricing action” is nowhere near the true increase in inflation uptick.

But it aims to avoid giving customers sticker-shock, and negatively impacting sales. “As the leader in the category, we are looking at how we create efficiencies, including through automation, to keep some of the cost increase away from consumers,” says Davison.

The company is also driving growth through product innovation.

It has expanded into pepperoni beef sticks and meat strips and nuggets, offering consumers another way to get their high-protein, low-carb snacking fix beyond jerky.

“Some categories just add new flavour after new flavour, and what Jack Link’s is trying to do in terms of growth is offer more functionality,” he says.

When it comes to finding savings on its end, “the challenge we have is the biggest cost of our product is beef,” notes Davison.

The rising price of beef relative to chicken and pork has raised eyebrows among industry observers. According to Statistics Canada’s Consumer Price Index, the cost of beef in store, including fresh and frozen, jumped 16.8% year-over-year in February.

In Quebec, allegations have surfaced of price collusion.  A class-action lawsuit filed this year against meat-processing companies, including Cargill, JBS Food Company and Tyson Foods, alleges that they conspired to raise the price of beef in the province. The companies have countered the claims lack merit.

Despite the pricing challenges, the jerky/meat snack category has shown resilience.

Conagra Brands, for instance, reported a 22% increase in sales of its meat snacks (including brands Slim Jim and Duke’s), for the third quarter of fiscal year 2022, ending on Feb. 27.

“The Slim Jim business and our Duke’s meats stick business has just been absolutely on fire,” Conagra Brands CEO Sean Connolly said in an interview with Yahoo Finance Video.  “Snacks are definitely very strong right now even in the face of inflation and some of the price increases.

Still, it is critical for the category not to expect consumers to shoulder the bulk of inflation increases, says Kylie Landry, brand manager of Calgary-based Direct Plus Food Group, whose meat snack brand in Canada is McSweeney’s.

“We try to increase prices as little as possible, because it is a luxury snack food to begin with,” she says. “If you keep asking consumers to pay more and more, a threshold will come where they won’t buy it anymore.”

Noting “this category is driven by promotions,” she says McSweeney’s will continue to partner with c-stores on promotions and tactics like secondary displays to help drive volume.

McSweeney’s is also finding growth from consumers looking for foods without sugar.

In 2020, McSweeney’s debuted a zero sugar beef jerky (the flavour was named Old Fashioned). Encouraged by the strong sales, it launched a second zero sugar flavour, Smokin’ Jalapeno, in March.

“The demand from consumers for zero sugar snack options has been massive, and we anticipate that growth will continue for McSweeney’s with our ZERO sugar jerky line-up,” says Landry.

Get more articles like this delivered directly to your in-box every Wednesday morning with the COMPLIMENTARY All Convenience e-Newsletter.