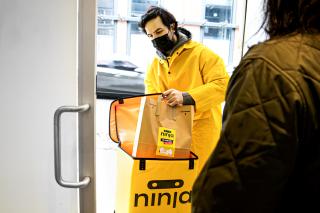 TORONTO - Wesley Yue's staff race against the clock every day.

When orders arrive through an app, "riders'' at his grocery delivery company Ninja have just 10 minutes to round up items and get them to customers via e-bike.

"When I tell people about what we're working on ... they don't really believe us,'' said Ninja co-founder, Yue. "A lot of their first reasons to try us is that they want to test out the promise of 10 minutes and then they get blown away and stick with us forever.''

If the U.S. is any indication, more competitors will likely follow and push the economics of food delivery to a level more extreme than ever before.

While food delivery services born and popularized in the mid-2010s like Uber, SkipTheDishes and Instacart market themselves as affordable, quick and convenient ways to get meals or groceries to your door, these new ultrafast competitors up the ante.

They make bold promises of even faster times and lesser or no fees, but at what cost and will the model stick?

Those answers are a toss up, said Michael Von Massow, an associate professor of food agriculture and resource economics at the University of Guelph.

He thinks those drawn in will need a few items in a pinch but save larger, more expensive shops for supermarkets.

Ultrafast delivery services aren't deterred. They are so fixated on kick-starting a habit that some, like Tiggy, don't even charge delivery fees and have no minimum order.

Ninja charges no fees on deliveries under $10, but anyone spending less must pay $1.99. In "exceptional'' cases, where the time guarantee is not met, it offers a next purchase discount.

Between wages, inventory and advertising, the Wall Street Journal found some ultrafast delivery companies average a $20 loss per order.

"We're trying to grow as quickly as possible, but (while) being able to see a realistic path toward getting to profitability within the company and not just subsidizing forever,'' he said.

Subsidizing deliveries is not unusual. Tech companies are accustomed to underwriting orders with investor cash until they reach a large enough scale and volume to crush competitors and become profitable - a feat even UberEats hasn't accomplished.

Grocers haven't stood in their way - yet.

Despite seeing meal kit and restaurant delivery services "nibble'' at business, Von Massow said "they're not saying, 'Boy oh boy, this is a fundamental change in how people are buying groceries.'''

But if even 25% of consumers shift to ultrafast, he expects grocers will get involved.

Yue isn't worried by that prospect. "There's just so much growth to be had for everybody in the marketplace,'' he said.

His growth plan eschews a food delivery hallmark: independent contractors offered no job security and few, if any benefits, in exchange for being able to chose when, where and how often they work.

Yue hires mostly part-timers. Job postings show they are paid between $15 and $17 an hour, compensated for wait times, provided with a e-bike and allowed to keep tips.

With UberEats and other platforms, "there's very little room for the delivery staff to shine through with exceptional service,'' Yue said.

Also key: micro-fulfilment centres stocked with groceries, in central neighbourhoods and closed to the public.

Tiggy has six in Vancouver and three in Toronto with an average order time of 13 minutes, said co-founder Eugene Bisovka in an email. He declined an interview.

Ninja has two in Toronto, one in Waterloo and plans for 10 more over the next year. They carry 1,400 items and will stock 2,500 later this year.

"We would never have like 20 brands of ketchup and I think most consumers are typically fine with that,'' said Yue."We typically have one, maybe two key brands per product type.''

He likens his meat and produce to a farmers market.

"We just try to bring in whatever is in season and that narrows down our selection a little bit as well,'' he said.

But even a smaller stock is impacted by the inflation, supply chain troubles and soaring prices of grocery giants. Ninja had trouble securing Ben and Jerry's ice cream earlier this year and in February, as Russia waged war against Ukraine, Yue found more items hard to obtain.

Stock is flowing again, but Prabh Gill believes these companies must engage in a "delicate balancing act'' to keep inventory in check, fine-tune their breadth of products and snatch up customers in a "mad dash'' for market share.

"In order for them to be profitable, they need the right density of demand as they're still gaining foothold in the market,'' said the McKinsey & Co. associate partner focused on retail.