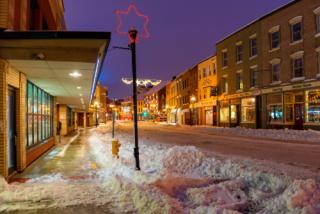 Not so long ago and particularly in smaller communities across Newfoundland, it was normal to walk down the street and see numerous convenience stores where you could obtain any number of items. In Burgeo, for example, the NLC is located in a hardware store, and there were once three convenience stores in East End Channel of Port aux Basques, but this is no longer the case.

Where there were once corner stores, there are now niche shops specializing in one or two items, like vape shops, candy stores, or craft stores.

Jackiee Sweet works at a specialty store in town said the business landscape is definitely changing.

"I find it different mainly because we focus on one specialty, one item, and we're getting a lot of people coming in for that item rather than multiple items,'' said Sweet. "I think the bigger franchises are taking over more so than the `Mom and Pop shops'. I think bigger corporations have more money and are able to combat the influx of pricing.''

With product costs being so high, the ability of corner stores to obtain the same selection and offer it for the same price might be one of the reason these niche shops are becoming more popular.

"The whole point of a convenience store is for convenience. You go there and they have every item, but they can't afford these days to have every item like big corporations such as Foodland can, so they're shutting down,'' said Sweet.

With specialty stores coming in and carrying some items that may also be available at convenience store locations, Sweet said it can have a good and bad effect on the community.

"Good, because this corporation here, I'm giving jobs to people in town, but I can also be taking away (customers) from local `Mom and Pop shops' if they sold similar items.''

With more niche shops opening in the area, the potential for community growth is another factor.

"I think the town is going to get more modern, not completely a city-feel, but almost, if that makes sense,'' said Sweet. "We'll go from something similar to a village, to more of a town.''

"It might be true in some areas and maybe not in others,'' said Leonard. "For example, a couple of years ago we had a young woman who was running a jewelry store, and it was more than jewelry. It was definitely crafts with gemstones and that kind of stuff. She was selling her products online internationally, and locally she started to get some traction and went the reverse by opening a store. Recognizing the jewelry line probably wouldn't pay for the heat, lights, and rent, she had to bring in other things to subsidize and offset that key bread and butter that was generating her sales. What I would say I am seeing the shift in is, when you have a corner store, you're starting to specialize in products that are locally and provincially found. So you're starting to see more local partnerships.''

One reason why these local partnerships are so important is the difficulty with transportation.

"There are challenges, for example, in getting fresh produce. Working with local retailers, you are starting to see a little more diversity and specialty in what you're putting out. You might have lettuce from a greenhouse in the Port au Port area instead of having everything coming in from outside the province,'' said Leonard. "I would say a convenience store we may have looked at in the previous 10 or 15 years is changing, but because entrepreneurs are seeing that there is strength in working together.''

One significant trend the CBDC has noticed is that more business startups are online.

"We are starting to see that there is a lot of money to be made when people start testing their business out online first,'' said Leonard. "There is a candy store in central that are bringing in highly specialized things that people are requesting, so testing it out online first is probably a safer bet. I do see more physical main street-style businesses still coming in. We (CBDC) have a 1-800 number and if someone is calling from a cell phone, every one of those inquiries come to me and I get to hear those conversations, and people still recognize the value for having bricks and mortar in the community because it brings jobs. You're talking to customers. You're talking to the community. There's a great deal of value there, but I'm seeing more entrepreneurs recognizing it's not the only way to make money.''

Because rural areas are much different than urban centres, it is natural for the trends to differ as well, but there is a common focus.

"We really need to focus more on the entrepreneurship culture so that, if I'm selling Product A in Port aux Basques, then my next door neighbour a couple of streets down may be selling something. We really have to try to build up a package. And that's not just products, that's also tourism. When we're looking at any sector, we need to be able to strengthen the inputs and outputs of a community on a regional perspective,'' said Leonard. "That whole value of working regionally is crucial, especially when you hit some of our rural communities, because if you can't maximize on some of those opportunities you're going to lose out on so much.''

By working with experts to form accurate reports and speaking with locals, the CBDC is able to look at trends and make a judgment on what businesses are needed and will be successful in certain areas.

"The Trinity-Conception area, for example, for the amount of people in the communities in that region, they had an extraordinary number of restaurants to the point where, if a new restaurant would open up, it would've been taking away business from someone else that's already existing, and nobody wants to see that. But, if anyone in one of those communities wanted to open a new style of restaurant that was so unique that it could draw in people from outside their region, then a case could be made for that,'' said Leonard. "Looking at that data from the regional perspective was very important. With the Baie Verte area, the same style of report, looking at the same number of people there, incomes and styles of families, and then looking at the number of restaurants, it was just a glaring opportunity.''

Honest and active input by local residents is crucial to determine probability of a business' success.

"Without that regional input, you're not setting yourself up for optimal success. You need to talk to more and more people in that region to see why or why not something worked,'' said Leonard.

Some significant factors that are pushing the business community into innovative new directions are the increased cost of living and the effects from the pandemic.

"Major shifts in the prices, the commodities, how you're going to get it,'' said Leonard. "We've always known here in this province, so it's probably not as big of an eye-opener as outside the province because transportation here has always been key, where we've got such a widespread region to get products from where it lands in the province to where it's going to be sold, but definitely more and more entrepreneurs are seeing it as more of a challenge. Labour shortages, how people want to work, how people want to buy is changing, but I think that opens a lot of opportunities as well.''

Leonard predicts more positive trends in the next few years.

"I think we will have some businesses in some communities that will create their own trends and be leaders, because they've already been informally working regionally to make sure the businesses. And when I say businesses I don't just mean for profit, I also mean the non-profit sector, because we have so many non-profits and social enterprises that are providing products and services that are needed in absence of a for-profit structure. So I think you'll start to see more creative means of meeting those needs in the community and you'll have much more of those people working together.''

As with everything, business tend to adapt and change over time.

"We still are very responsive, but because of the cyclical nature of all the ups and downs of all the resources in the province, we can bounce back and adapt really quick.''