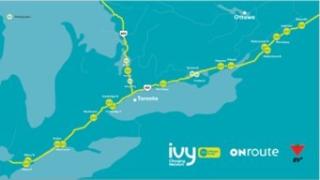 As road trip season is in full swing, electric vehicle (EV) drivers can now charge at 16 ONroute locations along the province's busiest highways.

"This partnership supports our travelers' charging needs at their local ONroute. This summer, stop in to charge-up for the next leg of your journey and discover that ONroute is more than you remember," Melanie Teed-Murch, CEO of ONroute, said in a release.

The chargers debuted in July, thanks to an agreement announced last year between Ivy Charging Network and ONroute, as well as its partners, Canadian Tire Corporation (CTC), the Ministry of Transportation and Natural Resources Canada.

"Automotive is a heritage business for Canadian Tire Corporation (CTC), and for 100 years, we have been proud to help Canadians move across our country. We're building on our commitment to provide convenient EV charging locations to make life in Canada better for our EV customers," said Micheline Davies, senior vice-president, automotive, Canadian Tire Corporation. "By the end of 2022, CTC and its partners will operate one of the largest retail networks of EV fast-charging stations in Canada, with over 140 sites, including the EV fast-charging stations at 16 ONroute locations along the 400-series highways in Ontario."

Each of Ivy's ONroute Charge & Go locations has between two and four chargers, with the possibility of further expansion. The chargers work with all current EV models, including charging ports for Tesla drivers.

"We are excited to deliver on our commitment of bringing Ivy's trusted and reliable Charge & Go fast-charger network to Ontario's busiest routes in time for EV drivers to enjoy their summer road trips with confidence and ease. Through this partnership and the funding provided by Natural Resources Canada, we're ending range anxiety by providing reliable charging at convenient and accessible locations on Highway 401 and 400," said Michael Kitchen, General Manager, Ivy Charging Network.

"We know that electric vehicles are the cars of the future. That's why Ontario is putting shovels in the ground to build critical infrastructure that will boost EV ownership, support Ontario's growing EV manufacturing industry and reduce emissions," said Minister of Energy, Todd Smith. "With EV fast chargers now available at 16 ONroute stations along our province's busiest highways, it's even more convenient than ever for drivers and families to grab a coffee or a meal while charging their car."