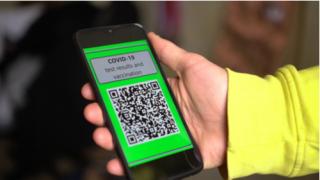 The system takes effect on Wednesday next week, requiring patrons to show proof of full vaccination and a piece of ID to enter settings that include restaurants, theatres and gyms. Businesses and customers can be fined for non-compliance.

While businesses will need to ensure the name and date of birth on a patron's vaccination receipt match those on an identification document, the venues will not need to validate any medical exemption notes presented.

The government acknowledged that the system was open to abuse as it detailed guidelines for the policy on Tuesday.

"There may be some situations where people don't have valid medical exemptions. However, we expect that they will be few and far between,'' said Health Minister Christine Elliott.

Dr. Kieran Moore, the province's top doctor, said there are very few approved medical exemptions to vaccination. He said medical professionals who abuse the system may be disciplined, and customers who use fraudulent medical notes may also be penalized.

The province also said a standardized note for exemptions was being developed for medical professionals to issue.

Elliott said the province is allowing medical exemptions under the certificate system so that people with legitimate reasons for not getting immunized can still have access to spaces where proof-of-vaccination will be required.

The system will initially require patrons to show a paper or digital receipt of vaccination along with a form of government-issued identification, such as a driver's licence, birth certificate or health card. On Oct. 22, the province aims to launch a QR code and verification app for businesses to streamline the process.

Elliott said the QR code and app would help reduce the risk of fraudulent exemptions. But people won't be required to download the code and can keep using paper records if they choose to.

Retail stores and services considered "essential," like grocery and convenience stores, are exempt from the rules. There are also exemptions for people entering an establishment to use a washroom, to pay for or pick up an order, to access an outdoor area not covered by the policy, or to purchase admission tickets. The system also doesn't apply to venue staff.

People under age 12 who can't be vaccinated are also exempt, as are people under 18 entering facilities for organized sports.

NDP Leader Andrea Horwath said the government's guidelines for the policy have come too late and don't address its loopholes.

"It continues to be full of exemptions and it's pretty confusing,'' Horwath said. She accused the government of "giving oxygen'' to anti-vaccine groups by not presenting a fulsome policy as COVID-19 infections are rising in the province. "Time is running out.''

"If (at) any point they feel threatened, we want them to call 911 as soon as possible to make sure that our police officers can be there to assist,'' Elliott said, adding that it's up to individual police forces to decide how to ready themselves for the system's implementation.

The government said all provincial offences officers -- including bylaw, police and public health inspectors -- can provide education on the system and issue fines related to it.

The Ontario Chamber of Commerce said it welcomed the guidance but still had unaddressed concerns about the system.

Rocco Rossi, the chamber's president, said businesses want vaccination guidelines for employers, legal protections for businesses in the event of lawsuits, and funding for resources needed to enforce the rules, such as hiring more staff.

He also asked the government to consider expanding capacity limits for affected businesses when it's safe to do so.

The province said first doses of COVID-19 vaccines increased by nearly 30 per cent the week after it announced the vaccine certificate system it said was aimed at protecting the vulnerable and avoiding another lockdown.

Also on Tuesday, the province announced it would offer third COVID-19 doses to more people with specific health conditions, following guidance from a national immunization committee.

People undergoing treatment for tumors, more transplant recipients, people with Stage 3 or advanced HIV and others undergoing immunisuppressive therapies are now eligible to receive a third vaccine dose to boost their immunity to the virus.

Ontario reported 577 new cases of COVID-19 on Tuesday and six more deaths linked to the virus.