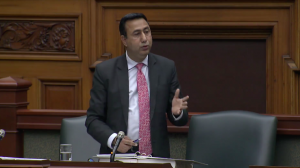 Gas theft across Ontario continues to be an issue, but relief may be imminent.

Bill 231 - Protecting Ontarians by Enhancing Gas Station Safety to Prevent Gas and Dash Act, 2020 - has passed second reading and is one step closer to becoming law.

While prepayment for fuel is already mandated in British Columbia and Alberta, as well as many states in the U.S., Ontario had yet to pass any similar legislation, despite calls from the industry to do so.  The tragic killing of Toronto gas attendant Jayesh Prajapati in 2012 sparked drew attention to the issue of gas theft in the province and led to calls for a mandated change to the system.

The Private Member bill is led by Mississauga-Malton MPP Deepak Anand, who said on Facebook that he is "thrilled" the bill is moving forward: "This Bill amends the Occupational Health and Safety Act, making sure employers at gas stations ask customers to prepay before filling gasoline. The act is also amended to require employers to provide training to workers involved in the sale of gasoline. Once implemented, this Bill will make sure employees at the gas station, bystanders in the gas station premises are safe, as no one will be able to run away without payment at the gas station."

In his presentation, Anand spoke about the grief suffered by families whose loved ones have been killed or hurt during gas and dash incidents.

In a statement, Dave Bryans, CEO of the Ontario Convenience Stores Association, said his organization has been "supportive and helpful" with the government on this bill for a number of reasons:

A) Our industry has experienced year over year increases in gas thefts through drive offs
B) Employee and customer safety is paramount to the future of the convenience gas business in Ontario
C) Losses for family run gas sites have increased with no expectation of increased enforcement throughout Ontario
D) Implementing this Bill will eliminate thousands of drive offs every year, allowing the convenience operators to concentrate on daily business issues.
E) Customers and businesses in other jurisdictions where prepay has been implemented have seen no loss of business
F) A level playing field for all gas sites will insure a quick adjustment period for ease of implementation.
It's worth noting, there would be some exemptions when it comes to compliance, such as independent gas sites that have old pumps, which would be allowed to continue with normal business practises until they were able to install new pumps with new technology.
The OCSA said that as the Bill is being reviewed by the Standing Committee, it may "call on independent gas retailers to participate in the process to encourage a level playing field as well as a quick approval of Bill 231."