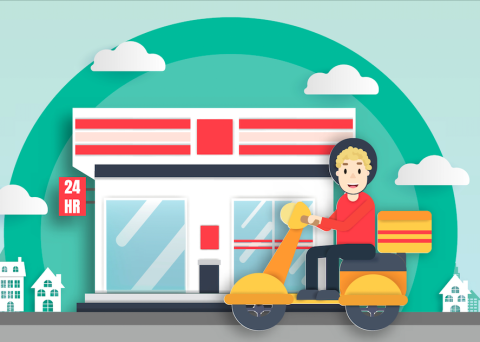 The delivery app accelerated the c-store into a new revenue channel during the pandemic, but the sheer number of providers, from SkipTheDishes and DoorDash to Uber Eats and Instacart, has left some struggling with “tablet farms.”

This is because each app has a different system for processing orders.

Unless they have made the significant investment and built their own aggregator – as 7-Eleven did as part of its 7Now app, which is being used across most of its Canadian footprint including for this purpose – stores have been forced to take one of two options.

The first is to juggle multiple tablets, a task that is time consuming, can compromise order integrity and cause worker stress. The second is to partner with one app or at most two and accept missing on potential sales.

Paytronix, a digital guest experience platform based in Newton, Ma., has debuted what it says is a solution to this problem. Called Paytronix Handoff, it is a delivery aggregator that aims to give c-stores more control over the third-party delivery channel through a single tablet.

“We saw first-hand the challenges that restaurants were facing, working with third-party marketplaces, and anticipated the convenience store industry facing the same challenges,” says Michelle Tempesta, chief marketing officer at Paytronix. “With Handoff, we have solved centralized menu management and customized pricing by third-party provider, the removal of the tablet farm at the point of service in the stores, and ingesting orders from third parties directly into in-store systems.”

She declined to provide names of the chains testing the solution, but confirmed “several convenience store chains are live with the product today and several are in the queue to roll out this year.”

In addition to providing one entry for all online orders, Patronix Handoff enables a store to decide how menu items are viewed, described and priced regardless of the app. By digitally connecting third-party aggregators to internal point of sale systems and store operations, it also helps staff more easily manage stock digitally.

Since the start of the pandemic, delivery – including from restaurants and grocers as well as c-stores – has been growing exponentially. According to Edison Trends, Canadians spent more than $700 million in March 2020 on food delivery orders, seven times larger than the month two years prior. Looking at YOY numbers for April 2021 (vs. the previous April), Canada transactions were up 86% and estimates now peg the Canadian market north of $9 billion annually.

The trend shows no signs of slowing down, as it has become a ‘new normal’ even as COVID-19 restrictions have lifted. In fact, SkipTheDishes CEO Kevin Edwards said late last year that online grocery has the potential to be worth a massive $120 billion per year in Canada.

Tempesta says c-stores need to prioritize the channel given the competition and to future-proof their businesses with generation Z, an age group born between 1997 and 2012.

“Convenience stores are dealing with a whole new population, gen Zers who are 10% less likely to have a driver’s license at age 18,” she says. “That means fewer drivers who are ordering from home and having products delivered at their convenience.”

Given the eye-popping growth and adoption of the delivery option, Tempesta says c-stores also need to protect their businesses from food delivery service providers who have emerged on dark web marketplaces.

“Convenience stores need this channel to sell products as an offensive move toward the way gen Z buys today, and also as a defensive move to ward off dark-store convenience product providers who offer delivery of just about anything within minutes,” she says.