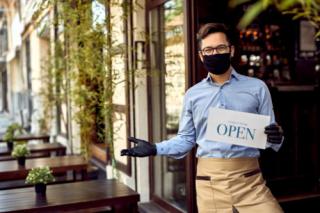 TORONTO - Restaurants and bars across Canada are hoping this holiday season could finally spell recovery for the debt-laden sector.

But, elevated inflation and a potential recession have them worried that their new normal won't pay the bills.

James Rilett, vice-president of Central Canada for Restaurants Canada, said normally the fall is a transition time between the busy summer season and the holidays, which are packed with parties and an opportunity to make some extra revenue before the slow, cold new year season.

Some restaurants and bars are starting to book holiday parties, both corporate and personal, but it remains to be seen whether bookings will return to pre-pandemic levels, he said. There are also fears that the winter could bring a wave of cancellations, after last year's holiday season saw COVID-19 cases skyrocket, and many establishments chose to close their doors for New Year's Eve.

Laura Carr, who owns Chez Nous Wine Bar in Toronto, said last holiday season was full of uncertainty. She remembers December starting off strong, with lots of bookings, but soon traffic declined, cancellations increased and COVID-19 cases were up. Eventually, she decided to close her doors to diners again, as did many businesses over the holidays.

This year, things are still uncertain, but less so, said Carr. She's already getting event bookings, and she hopes business will keep ramping up into the holiday season.

While it's too soon to tell whether bookings will be back to normal, there are certainly more inquiries than last year, she said.

"It would be great if we could see those pre-pandemic holiday parties,'' she said.

There's extra hope pinned on this holiday season because of the lingering financial effects of the pandemic, said Carr, such as debt and rising input costs. Things might feel almost back to normal for customers, but restaurateurs are still trying to make up for lost time, she said.

"One busy Friday night does not make up for two and a half years of shutdowns and rent that I was paying when there was nobody in here,'' she said. "I'm cautiously optimistic, but ... the hangover is lasting.''

Meanwhile, hopes for a "back to normal'' summer were softly dashed, as traffic was still down and inflation made the cost of running a restaurant much higher, said Rilett.

Seguin said inflation has doubled or even tripled the costs of some products.

As inflation affects restaurateurs, she knows it's also affecting customers, and knows they may be more cautious with their spending this holiday.

According to Restaurants Canada, in August Canadian consumers started to tighten their purse strings amid high inflation, as fewer Canadians purchased meals from restaurants despite the fact that August is normally a busy month for the industry.

As a result, some restaurateurs are extending patio season for as long as they can when the weather allows, he said.

Restaurants are still dealing with elevated levels of debt from the pandemic, plus higher input costs and difficulties hiring, said Rilett.

A busy holiday season would "pay a lot of bills,'' he said.

Fewer new food service businesses are opening even as more close, said Rilett, meaning the number of restaurants overall has gone down in the past year.

He's hoping this holiday season will provide something of a "measuring stick,'' showing the industry what to expect from the new normal. But a looming recession could mean the new normal isn't what many expected.

"Any time people are feeling the pinch, or even think they're going to feel the pinch, they start to cut back. And that hits us pretty quickly.''

The holiday season is on everyone's mind, said Seguin, but so are the months after - normally slower months for the sector, now talk of a recession means it could be an even harder winter.