When customers come to the counter of Trust Convenience in Calgary and ask Dharmender Khosa if he is the owner, the 30-year-old entrepreneur fibs, pretending to only manage it for someone older.

“Then I’ll ask them for any suggestions to improve the store that I could pass on,” says Khosa. He gives an example of the kind of feedback he gets from the store’s highly multicultural clientele. “Someone might tell me, ‘You should carry this chocolate bar brand from Europe—it is really popular there.’”

He says of concealing his identity, “If I tell them I am the owner, people won’t open up to me in the same way. They’ll worry, ‘Oh, I might offend this guy’ and just respond with a generic comment. They won’t share those suggestions.”

While corporate stores must go through a chain of approvals to try and bring in new products, independents can act on this store-level customer intelligence because of their autonomy.

It is a competitive advantage that Trust Convenience, which is located at the Savanna Bazaar shopping market in Calgary’s northeast, leans into to differentiate itself.

And so, the list of products Trust Convenience has imported to its shelves include Hershey’s Pink Lemonade chocolate bar from Brazil; a nitrogen-infused cola called Nitro Pepsi that PepsiCo launched in the U.S. earlier this year; and Sensations Peking Spare Rub Oriental Crackers from the U.K.

Khosa says he “impulsively” opened Trust Convenience in early 2020 with the support of his fiancée, a teacher who is studying to be a lawyer.

The store didn’t initially march to its own drum.

“We were getting compared to everyone around us—to Circle K, to 7-Eleven. People would say, ‘You don’t have this, you don’t have that,’” he recalls. “The store was brand new, didn’t have franchise support and my account was in the negative. Four months in, friends and family were starting to lose hope it would be a success.”

Of course, the fact it launched at the start of the pandemic didn’t help.

However, the pandemic having brought supply chain challenges to the fore, Khosa says he realized he needed to rethink how he would keep shelves stocked.

He found he could import a lot of interesting products, including from global brands well-known to Canadians, in different and exotic flavours (see sidebar), while keeping the usual convenience snack offerings.

“When everyone else was asleep in Calgary, I’d call up other countries during their daytimes, using Google Translate about 90% of the time to communicate with sellers there,” Khosa explains. “After a while, these international sellers and brokers start contacting you.”

Khosa, who was previously in trucking, also has friends in that sector who have helped connect him with stores in the U.S. to get product. “That is 80% of the time how I’ve done it,” he adds.

Trust Convenience’s ability and willingness to shake-up its product mix lends itself to content creation. thereby driving social and digital engagement. He has even drafted a brand handbook, which includes logo specifications, to be followed in advertising and marketing.

On Instagram, it has more than 8,250 followers. “Between me and my fiancée, we manage it,” says Khosa. “If we get something new in, and it is good, I’ll post product photos.”

The store also has dozens of glowing recommendations on Google reviews.  “Amazing selection. Products you won’t find anywhere else in the city,” reads one from July, accompanied by a photo the reviewer snapped of their purchases, including Cocoa Puffs Popcorn with cocoa glaze and Tostitos con mas salsa verde.

Because a lot of the imported products are limited-edition, he says they always have room to bring in new products, giving shoppers a constant rotation of something new and fresh to consider.

“That is how we get a lot of repeat customers,” notes Khosa. “People will tell us they came in to see if we had something new this week, or because they saw a social media post.’”

Now more than two years in with the store, he says the operation is cash-flow positive, and proceeds are being reinvested in the business to further innovate.

A store renovation is currently underway to create two separated sections, taking advantage of the store’s front and back entrances.

“I am going to introduce cannabis in the back half of the store, and the front will be convenience like it is now,” explains Khosa, who notes the store is near a school and needs to keep being family friendly so the two spaces will be completely separated.

He also hopes to open a second Trust location next year. But don’t expect it to look like the current store. “I don’t want to duplicate and multiply what we have now,” he says. “Each Trust should be their own destination.” 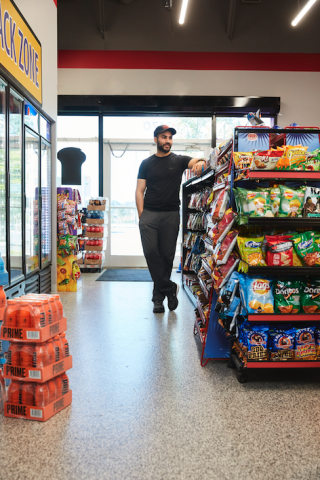 Trust Convenience imports in snack and beverage products, from the U.S. to Japan and Europe. But in keeping with its brand promise, they are often from a trusted global brand, like Mondelēz, General Mills or PepsiCo.

“When people see a new product from a brand they know, they say, ‘Well, we have this in Canada, maybe the products they sell in Europe will be interesting, or taste better,’” says Khosa. “Their curiosity kicks in.”

Research shows customers are looking for variety and to be surprised.

According to a 2021 Mintel study, 43% of consumers say they look for new flavours all or most of the time. Another 41% reported doing so occasionally. In other words, 84% of consumers are open to considering something they haven’t tasted before. 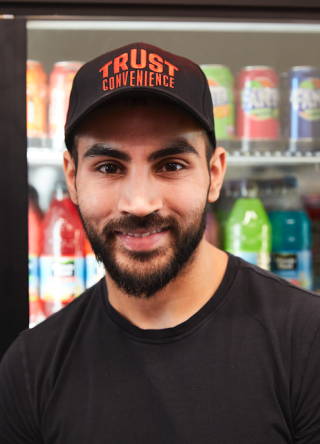 Shake it up: As an independent, you have the flexibility to bring your customers new and interesting products they won’t find anywhere else.

Brand awareness: Trust Convenience is very careful about its image and even has a brand book to guide its social media presence.

Create an experience: Khosa wants shoppers to be immersed in the experience of discovery and draws in new and repeat customers with enticing social media posts showcasing unique products from trusted global brands.

Convenience Store News Canada + OCTANE are always looking for interesting and innovative convenience, gas and car wash operators to profile. Do you have an interesting story to tell? A new location? A fresh approach? New equipment?

We want to hear about it!