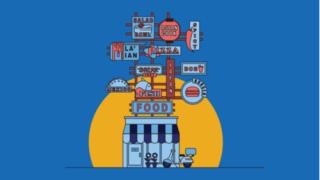 While “ghost kitchens” sounds spooky, the potential benefits of this foodservice trend are anything but. Ghost kitchens are spaces where restaurant branded meals are prepared for takeout and delivery. Multiple brands can operate out of the same kitchen with one team of staff, lowering costs for all operators involved. While this trend began pre-COVID, the pandemic-related boom in demand for takeout and delivery meals boosted momentum. “[Ghost kitchens have] turned into a very enterprising business where you’ve got four or five restaurants coupling into a venue with a common kitchen and common storage,” explains Kevin Kelley, principal at California-based design firm Shook Kelley. “And now, we’re starting to see those inside of grocery stores.”

Indeed, major grocers have announced their foray, via partnerships, into the ghost kitchen space. In March, Walmart Canada announced it was teaming-up with the (aptly named) Toronto company Ghost Kitchen Brands. The first Walmart-based Ghost Kitchen opened in the spring in St. Catharines, Ont., followed by Toronto and Woodstock, Ont., with locations planned for Lachenaie and Saint-Constant, Que. Customers can either order from a kiosk in the Walmart store or online for pickup or delivery, choosing from more than 20 brands including Quiznos, The Cheesecake Factory Bakery, Rocky’s Italian, Canadian Jerk, Saladworks, Taco del Mar, and Ben & Jerry’s. In September, a Walmart Supercenter in Rochester, N.Y., became the first U.S. location to feature a Ghost Kitchen operation, with at least 30 more locations in that country planned over the next two years.

And this August, U.S. grocery giant Kroger announced a similar partnership with California-based Kitchen United, whose onsite kitchens in Kroger stores will feature up to six local, regional or national restaurant brands. The first is slated to open in Los Angeles this fall, with additional sites planned for the rest of the year.

For insights into the opportunity for convenience stores to get into foodservice by partnering with ghost kitchens, check out "No stove, no problem" in the November/December 2021 issue of Convenience Store News Canada.