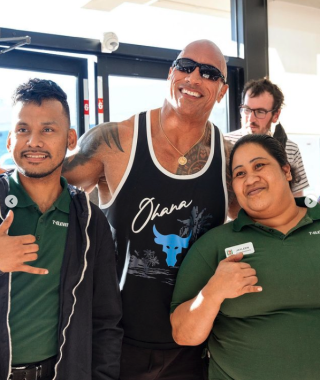 The Rock posing with 7-Eleven employees in Hawaii (Instagram)

A 7-Eleven employee in Hawaii got a surprise customers when Dwayne 'The Rock' Johnson visited the store to right a decades long wrong.

In an Instagram post, the actor and former wrestler explained that his family was "broke as hell" when living on the island. In turn, every day for about a year, the then-14-year-old would steal a king-sized Snickers bar from the same 7-Eleven store.

"I have been waiting decades to do what I am going to do right now," he said in the lead up to the store visit, adding he "had to 'right the wrong' back home in Hawaii after all these years 🙋🏽‍♂️🍫."

Johnson said the same clerk was there daily and "always just turned her head and never busted me."

Calling Snickers his "pre work-out food" Johnson said the small amend was a way of exercising old demons, as the guilt had plagued him for more than three decades.

"I’ve exercised a few big demons over the years (I still have a few left;) so I know this one seems VERY SILLY, but every time I come back home to Hawaii and drive by 7-11…I always knew I needed to go in and clean out every Snickers bar they had - the right way."

Staff and customers were delighted by the impromptu visit, with Johnson posing for photos, handing out the paid-for Snickers bars and leaving the rest for customers to take for free.

"If somebody looks like they're stealing Snickers, give them these so they don't steal it," Johnson told the store clerk.

Johnson spent $248 on candy bars and even tipped the store clerks.

"We can’t change the past and some of the dumb stuff we may have done, but every once in a while we can add a little redeeming grace note to that situation — and maybe put a big smile on some stranger’s faces," he said.