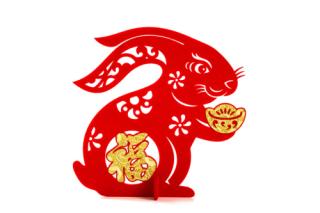 When Madelyn Chung was growing up, just a handful of stores had Lunar New Year displays.

It felt like a special homage to her Chinese culture.

Now she looks at the proliferation of Lunar New Year retail sales and marketing campaigns across Canada with a more critical eye.

"I equate it to rainbow washing or green washing,'' she said, referring to businesses that use pride colours to appeal to LBGTQ shoppers or ecological claims to appear environmentally friendly without taking meaningful action.

"Some stores just want to capitalize on the Lunar New Year celebrations because they know there are a lot of Chinese people who have money to spend on luxury items,'' she said in an interview from Toronto.

The Lunar New Year is a popular festival in many Asian cultures involving large celebrations, shared meals and gift giving.

Ahead of this year's celebration on Jan. 22, retail stores are increasingly seizing on the holiday spirit.

Many have set up special in-store displays, particularly department stores in parts of the country with larger Asian-Canadian populations.

In Toronto, for example, Holt Renfrew is offering an afternoon tea for Lunar New Year, while Hudson's Bay has a window display and curated in-store products for the holiday.

HBC spokeswoman Tiffany Bourre said that while the store is excited to celebrate occasions, "inclusivity and representation is a focus year-round from the brands we invest in and products we sell to the people that make up our organization.''

"I've definitely noticed an uptick in brands marketing their products or putting a spin on their collection for Lunar New Year,'' said Joyce Lim, co-founder of Sprout collection, a clothing rental service.

It comes at the end of a string of shopping events - Black Friday, Christmas and Boxing Day - at a time when sales usually hit a low point as bills pile up and consumer fatigue peaks.

"It's a quiet time in retail,'' retail analyst Bruce Winder said. "A lot of stores lose money in the first few months of the year. They need cash to keep coming in and the Lunar New Year is an opportunity to create a mini sales event.''

Yet the adoption of Lunar New Year-themed sales in department stores and malls comes as many Chinatown neighbourhoods in Canada are under threat of redevelopment.

Many small mom and pop shops owned by Asian immigrants also folded under the weight of shutdowns during the COVID-19 pandemic.

"Asian people are not one homogenous group ... there will be different opinions,'' Chung said. "I think there will be mixed feelings about the commercialization of Lunar New Year.''

Upscale brands like Dior and Montblanc offer everything from handbags and fountain pens to clothing and cosmetics for the holiday. Items often feature bright shades of red and gold and the zodiac animal of the year.

"A significant portion of designer brands' revenue comes from an Asian clientele,'' Lim said. "I'm not surprised that they're trying to cater to this specific subset of shoppers in what is perhaps the most auspicious time of year.''

Yet Lunar New Year sales and products are also expanding beyond the luxury retail space.

Even certain discount stores are selling decorations and other items for the event.

It's part of the retail industry's efforts to reflect the diversity within the Canadian landscape and "to provide customers with services, products and special events that speak to their experiences and backgrounds,'' Retail Council of Canada national spokeswoman Michelle Wasylyshen said.

In 2021, more than seven million people in Canada reported having Asian origins - nearly 20% of the entire population, according to Statistics Canada.

Chinese Canadians made up nearly 5% of Canada's total population in that same year, the federal agency said.

Meanwhile, rather than simply repackaging products for Lunar New Year, some brands are collaborating with Asian artists on unique products to mark the occasion.

"Some companies just slap a bunny on a product and call it a Lunar New Year gift,'' Chung said (2023 is the year of the rabbit in the Chinese and Korean zodiacs, while in the Vietnamese zodiac it's the year of the cat).

"I saw a red Playboy shirt with the bunny on it that just made me cringe,'' she said. ``"But some stores are taking a more thoughtful approach and actually involving Asian artists to create something special.''

"It's great when stores actually team up with Asian creators,'' Chung said. ``It's about actually supporting these communities as opposed to just capitalizing on a really important time of year for them.''

Still, while some stores are taking more respectful approaches to Lunar New Year sales that incorporate Asian designers, Lim urged Canadians to think twice before rushing out to buy a new wardrobe.

"Given the economy we're now in and the rising cost of living, we should try not to get sucked into these marketing campaigns,'' she said. "Don't rush out and buy a Dior watch just because there's a bunny on it.''