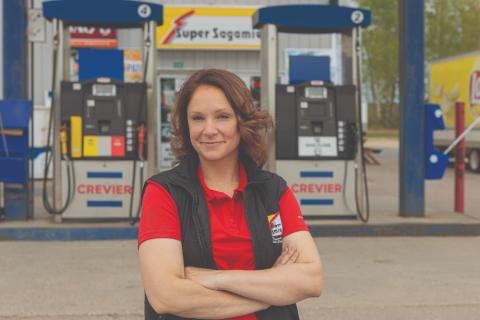 As a teenager, Véronique Chiasson says she never wanted to stay in the remote community where she grew up in Quebec’s rugged Lac-Saint-Jean region, let alone return there to take over the gas station and convenience store that her parents owned and operated on the outskirts of town.

“I wanted to go and see the world,” recalls Chiasson, who left Sainte-Jeanne-d’Arc at age 18.  “No way was I ever going back, especially to buy a business that I grew up watching my parents work 100 hours a week in.”

But a year ago, on the eve of the pandemic, Chiasson, now 35, did exactly that.  “It’s a lot of hard work but I love it,” said Chiasson, who took over Dépanneur Chiasson Service Super Sagamie from her parents, Michel Chiasson and Line Dufour, in March 2020.  “Everyone has been so supportive. It’s been like a dream come true.”

Located next to Hwy. 169, a provincial road that circles Lac Saint-Jean, the store sells gas from four pumps under the Crevier banner and is equipped with an electric vehicle (EV) charging station.

In addition to a SAQ outlet that allows the sale of alcohol, the store features regular c-store fare under the Sagamie banner, as well as beer, lottery tickets and ready-to-eat wraps, salads and healthy snacks that are made on site under La Cour aux Saveurs. The prepared food concept, from Montreal-based Beaudry & Cadrin, is a turnkey foodservice solution popular among Quebec c-stores.

Chiasson introduced the fresh food items shortly after taking over the store and she, along with her mom and long-time store employee Nancy Vaillancourt, can be found prepping in the kitchen most mornings. 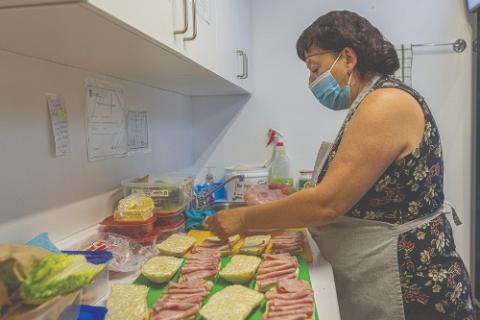 Nancy Vaillancourt, can be found prepping in the kitchen most mornings.

“The response has been amazing,” she says, adding the ready-to-eat menu has helped the business generate steady traffic and reach record store sales during the pandemic. “A lot of people from town and passers-by stop in to get gas, but also grab food and other things they need. Sometimes it gets awfully busy in here.”

That’s a far cry from the struggling business that her parents founded 37 years ago after converting the small, unprofitable garage owned by her father, an auto mechanic, into a c-store.

“My parents were always there,” says Chiasson who, like her older brother Marc, worked at the store on weeknights and weekends as a teenager. “Business was so slow I could always get my homework done.”

Soon after leaving home to take business courses in Quebec City, where Marc was already living and working for Canada Post, Chiasson decided to learn English and took a housekeeping job in Halifax.

After two years in Nova Scotia, she and a boyfriend spent six months backpacking and hiking in New Zealand. She returned to Canada and got a job with Via Rail, working for a year at Union Station in downtown Toronto before transferring to Montreal.

After several years in the Quebec metropolis, Chiasson tired of big-city life.  “I started longing for the open spaces like where I grew up. And since my parents were then trying to sell their store, I approached them about buying it.” 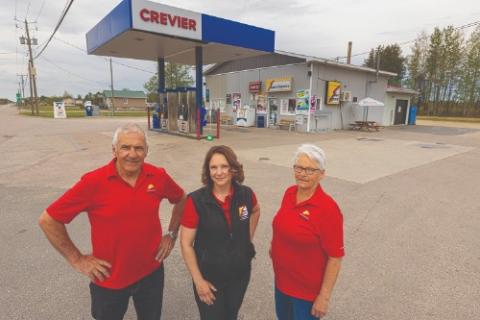 For Michel Chiasson and Dufour, whose decades of hard work had built the business into a successful one, the decision to sell to their daughter was easy—once they were convinced that she understood the level of commitment and sacrifice needed to succeed.

“You can’t and don’t count the number of hours you work when you own a small business,” says Michel Chiasson, who continues to help out at the store with stock orders and handyman jobs.  “You have to be all-in for the long haul.”

He and his wife are both amazed and ecstatic by their daughter’s strong work ethic, her firm control over the business, and the positive reaction she’s received from the community.

“People here are proud of her,” says Michel Chiasson. “We’re in a remote region where kids leave and don’t come back. This is a good news story for everybody.”

For her part, Chiasson credits her travel and life experiences for preparing her successful return home and entry into the world of business.

“They gave me the knowledge and self confidence I needed to do this,” she says.  “If I’d never left here I think I would’ve been too shy and insecure to have taken over the business.” 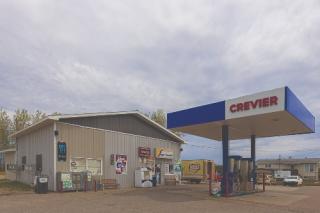 1. Customer service is the number one priority

“It’s super important. You want people who come in the store to be greeted with a smile.”

“You can’t show it being impatient or snappy with employees or customers when you’re feeling overwhelmed by all the work that has to be done. Especially during the pandemic, because everyone’s suffering.”

“Travelling helps build character and confidence so that you can say ‘no’ when you need to. It also allows you to see many businesses and what works and what doesn’t.”