A commercial cooking facility or virtual restaurant used for the preparation of food consumed off premises via delivery or take-out.  The concept could become “a $1 trillion global opportunity by 2030,” according to Euromonitor International.

With more than a month before its grand opening, Anthony Magnini is surveying the ongoing construction of his company Gateway Corporate Group’s flagship property at Rymal and Pritchard Roads in Hamilton, Ont., up on the mountain.

The site includes a Mobil gas station and a two-story grey building. “This side will be the convenience store,” Magnini says, touring a well-lit 3,000 sq. ft. space on the ground floor, where work is being done to prepare for a delivery of refrigeration units, enough to accommodate beer and wine should the province open up their sale in c-stores. 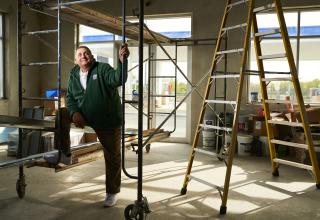 The c-store will fly the Hasty Market banner, however on the opposite side of the ground floor, an 1,800 sq. ft. space will be branded Epic Eats! Here, customers will be able to order from seven different restaurant menus, which at the moment include Greek and BBQ, with more to be announced. Epic Eats! will offer pick-up and delivery, as well as seating for those who want to dine on-site.

“We’re also going to prepackage and sell that food on the convenience side,” says Magnini, a former football star whose father and grandfather also worked in commercial property development.

The food will be freshly made in the basement, which is being outfitted with a large commercial kitchen and where a service elevator will shuttle the dishes up to the ground floor. The basement’s other side will be devoted to Gateway’s own beverage company. “We will be bottling our own brand of water,” he says.

Gateway also has its own coffee company, Café Sombra Grande.

In offering high-quality foodservice within the c-gas site—which includes executive offices on the second floor—the company is betting big on a so-called ghost kitchen to bring restaurant-branded meals to customers.

For instance, Gateway has partnered with Opa!, a Calgary-based quick-service restaurant chain of Mediterranean food, on the Greek menu items. Opa! has in recent months opened bricks-and-mortar locations in Ontario, including in Milton, North York and Vaughan, and will now, through Gateway’s ghost kitchen, have its food freshly made, branded and available to customers, without the need for a storefront.

The evolution of ghost kitchens

According to figures from Euromonitor International, the ghost kitchen/virtual restaurant concept could become “a $1 trillion global opportunity by 2030.” It found that 52% of consumers worldwide are comfortable ordering from a delivery-only restaurant—meaning, no physical outlet.

While Canadian figures are difficult to come by, ghost kitchens have been popping up, including from the world’s largest retailer.

Walmart Canada told Convenience Store News Canada it has four ghost kitchen locations in Ontario: St. Catharines, Woodstock, Toronto (at its Downsview store) and a new location in a Store Support Centre in Mississauga. From these stores, consumers can order online or by kiosk for pickup or delivery from more than 20 food brands, including Quiznos, The Cheesecake Factory Bakery, Rocky’s Italian and Saladworks.

Walmart Canada’s virtual kitchens are a partnership with Toronto-based Ghost Kitchen Brands announced last year, and will also include a yet-to-open location each in Lachenaie and Saint-Constant, Que.

This past summer, Walmart Canada also began piloting a virtual convenience store for customers in the Greater Toronto Area.

Among international c-store chains, Alimentation Couche-Tard announced an investment in Kitchen United, a ghost kitchen and restaurant hub technology company based in California. “We see many commercial opportunities in partnering with Kitchen United as it prepares for considerable scale,” said Kevin Lewis, chief marketing officer at Couche-Tard, the parent company of Circle K.

Gateway’s Magnini sees the ghost kitchen as a way of evolving the convenience/gas store combo—bettering the food quality and service a c-store can offer, both for locals and travellers, including truck drivers coming off nearby highways for a pit-stop.

“A destination is what people want and that’s what you have to give them,” he says, noting the Gateway concept brings the past to the future. “It harkens back to the 1960s, when I grew up and everything was freshly made, not processed and prepackaged. It was a time when good food brought neighbours and family and friends together, and we want to get people back to what I call the happy days.”

To that end, the building on the Epic Eats! side also includes a walk-up window, from which Gateway is hoping to serve ice cream parlour classics, like a banana split or milkshake. “We’re in talks with two or three ice cream manufacturers,” Magnini notes.

Gateway, which also develops residential and hotel properties in Canada, the U.S. and Mexico, has had convenience and gas station stores in Ontario before. It recently sold a store in Burlington, which featured a Tim Hortons.

The new flagship, however, is on a large parcel of land, giving Magnini the canvas to bring his $10-million vision to life. It entails additional retail development around the perimeter of the land. Magnini hopes, for instance, to lease to a local bakery that also puts a premium on quality ingredients and freshness, right across from the Gateway building.

When it comes to the ghost kitchen, the company not only is able to provide a variety of food options, Magnini likes that they also get to handle quality control.

In fact, a charitable foundation is being set up to deliver Epic Eats! meals that would otherwise be wasted at the end of every night to homeless people in Hamilton.

The foundation will work in partnership with USA Football International, which aims to help recent college graduates and free agents get the opportunity to play the sport at the international level.

USA Football International is made up of coaches and players from the NFL Alumni Association and CFL Alumni Association. Magnini, who played outside linebacker for Boston College and was later on the coaching staff for several NFL teams, still coaches the sport in the U.S.

He sees a lot of similarities between football and the convenience sector.

To keep with the football analogy, he says Gateway’s flagship property “will be like the Super Bowl of convenience stores.”

“What we are doing here—nobody has seen it before,” says Magnini. “We want to take it and reproduce the concept… elsewhere. I already have two locations ready to go in Ontario, but we’re in no hurry. We want this store to be picture-perfect first.” 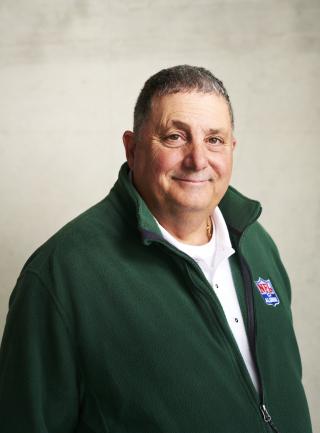