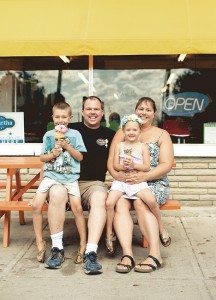 TJ Sheehan took over the Enniskillen General Store in 2014, and has made a point of honouring the store’s long history in Enniskillen, ON ever since. The store was built in 1840 as a Canada Post outlet, and has since gone through a number of owners, but the community surrounding the store hasn’t wavered. The store has become a staple in the small town, and has become known as the destination for Kawartha Dairy ice cream.

In 2014, the Sheehans launched a small event with a focus on the buttertarts they sold in their store.

“We wanted to do a demo style day featuring some of the bakeries of the buttertarts we normally sell in our store. We quickly realized people really love buttertarts!” he says. And in its second year, The Butter Tart Fest was launched.

“We had six vendors who brought approximately 1,500 buttertarts and they were all sold out within 20 minutes. It was a disaster. We had hundreds of people arriving, but we were not prepared for it. I was shocked and had to say sorry many, many, times during that day,” he recalls.

As they say, the third time’s a charm. “Our third year was amazing! We invited 16 bakeries and they ended up selling 12,700 buttertarts in one day. We had some of local politicians as well as reporters come and we estimated 3,000 people came to our Buttertart Fest in that third year.”

This sounds like a fun event, but why would a convenience store bother to get so involved in its community? 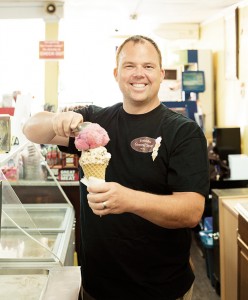 “Our community supports us, so it's really important that we support them when we can. Doing special events is a lot of work but it’s a great benefit to our store.”

In other words, the benefit is mutual. A small business that not only takes from its community but also gives back to its community is essential in building relationships, regular clientele and a positive reputation.

It’s not just small independent stores that can make a difference.

Sean Sportun, ICPS Manager, Security and Loss Prevention with Mac’s Convenience Stores believes there are additional benefits to being involved in the community.

“Positive community engagement or involvement is an essential first step to breaking barriers and building trust with all our stakeholders. Convenience stores are a staple within every community and our industry must recognize that we all play an important role in what we can all collectively do to enhance community safety,” he says.

It can also help to raise your store up and deter criminal activity. “When a company or brand is invested in the communities where they operate and work, people are less likely to target you with criminality and are more likely to report incidents to police or Crime Stoppers if an incident does occur,” says Sportun.

How can you get involved?

Sportun suggests starting by simply getting involved. “Know the issues within your community and see if there is something you have to offer as part of the solution to correct the issue. Develop open communication with your local police service and community centers; and most importantly develop superior relationships with your customers – especially the youth.”

As Enniskillen General Store’s owner TJ Sheehan explains, there are many ways for independent retailers to get involved in their communities. “Retailers can easily connect through many service organizations such as the Rotary Club, Lions Club, Optimist Club, or even nearby community centres. Sometimes it’s as simple as hosting a customer appreciation day, or hosting a special product day, or even a fundraiser or BBQ,” he says.

This past winter, Fisherman’s Friend ran a contest called Friend of the Community. The contest aimed to recognize and celebrate independent retailers. The initiative was promoted through CCentral.ca and at The Convenience U CARWACS Show in Toronto this past March and asked retailers to share their stories about how they are making a positive impact in their hometowns. All contest participants had the chance to win an iPad, Visa gift card and Fisherman’s Friend prize packages, along with one recipient being awarded the Fisherman’s Friend: Friend of the Community Award.

Cree Land Mini Mart Ltd. in Regina, SK stood out and was awarded the top honours. This past winter, Cree Land Mini Mart donated 3,000 toques to schools and daycares in its neighbourhood and every year supports the First Nations University of Canada Pow Wow, an event that takes place every April.

Doug McRae operates the neighbourhood store. “Our store has been here for about eight years now. The property and the store are owned by Piapot First Nations and we’re located on status land in north central Regina,” he explains, adding that they’re a very busy community store with a lot of foot traffic.

“There are many cultural events that happen in this community, as we’re heavily populated with First Nations people. Whenever there’s anything like a cultural walk, we always supply the bottled water for that,” he says. Every year they host a customer appreciation day where they cook hamburgers and hot dogs and give them away to their community. It’s their way of giving back to their customers.

Giving back is an essential part of the store’s success. “We live and work here. My staff lives in this area, and it’s certainly where my customers come from. We believe in giving back. It’s part of our mandate here,” says McRae.

“With this promotion, we wanted to recognize and celebrate our independent retail partners who are actively involved in their communities,” said Voula Papadakos, Marketing Manager, TFB & Associates Ltd. “We were so pleased with all the wonderful stories we received from our retailer partners that we intend to make this an annual initiative to showcase all the great community good will.”

How are you making a difference in your community? Look out for the second annual Fisherman’s Friend: Friend of the Community contest, launching later this year!