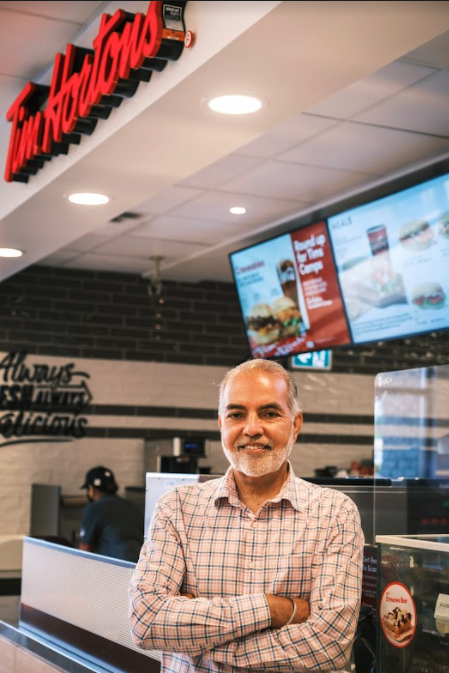 Barj Dhahan has earned a lot of experience as a fuel site retailer. Dhahan got his start back in the 1970s when he attended the University of Victoria and worked at a Merit Oil location. Shortly after that he moved to Vancouver and became a manager at a Merit oil location in the Kitsilano neighbourhood. The site soon became a Petro-Canada, and Dhahan became the dealer as a lessee. Today, Dhahan, through his Sandhurst Group business, owns and operates three Esso sites (2360 King George Blvd., Surrey; 16815 96th Ave. Surrey; 24796 Dewdney Trunk Rd., Maple Ridge).  He is also one of British Columbia's most prominent Tim Hortons franchisees with nine restaurants, of which three operate alongside his fuel businesses

“In the 80s, I started buying small stations around the Vancouver area. I found I could clean them up and improve them, and they would start making money,” he says, mentioning sites in Squamish and Maple Ridge as examples. “These sites were mom & pop operations with the husband running the garage and the wife running the gas bar. I discovered that by putting proper business procedures in place and cleaning up the appearance of the operation, the site could see as much as 30% gains in sales.”

Back in the 80s, gas stations still had service components. In some cases, Dhahan would keep these repair services running while he refreshed the location. However, times changed, and the repair aspect of gas stations fell away. “There was a new model that required sites to have other businesses to attract customers. This model meant convenience retail and foodservice as well as a car wash. Today, foodservice is an essential part of a winning business equation for fuel sites,” he says, noting that sites are larger too, commenting that many locations require an acre of land with 12-16 fueling positions to be successful. “But, even small rural sites can be a success with the right mix of services,” he says.

Dhahan is a McDougall Energy dealer, a relationship he has built over the last 10-years. A decade ago, Imperial Oil decided to support its branded dealers while McDougall Energy offered supports for independent operators such as Dhahan. “I stayed on with McDougall and have found there is money to be made selling fuel. The price I pay is market-driven, and McDougall has been responsive to our needs. It’s been a good partnership,” he says, adding that he is still able to use ESSO branding and programs such as those provided through PC Optimum loyalty cards.

Dhahan’s advice is for operators to be retailers, not just fuel sellers. Toward this end, his locations offer convenience stores and branded foodservice in addition to gas and diesel, as well as touchless PDQ Laser wash systems. “While we offer food items in-store as well as stand-alone Tim Horton’s, there is no cannibalization of service. Rather, it’s complimentary,” he says, noting that his Tim Horton’s franchisee operations are about 75% drive-thru business. Dhahan remarks that he looks to established leaders such as 7/Eleven Canada as good templates for success in store retailing. “We do regular tours of successful retail sites such as 7/Eleven and bring back good ideas like pizza and hot dog programs that get instituted in our locations. We also look to create localized offerings. For example, in Maple Ridge, there are more restaurants near the site and fewer grocery stores, so we sell more packaged food and grocery items than you would typically find in a traditional fuel site c-store.”

Locations must be refreshed continually to stay relevant in the market, he says. Towards this end, he recently renovated his King George Blvd. location in Surrey. The site, constructed in 2010, now has a newly redesigned forecourt, c-store, car wash and Tim Horton’s.  Gondolas were added inside the c-store, and shelving received an update.  As well, Dhahan instituted a new hot food program with pizza and sausages.

“We noticed that fuel customers make planned purchases with some walking into the c-store to buy things that can include food items. At our Tim Horton’s locations, customers do not tend to use the gas bar or c-store. Their purchases are dedicated. For us, the Tim Horton’s business is a good use of space on site that increases our visibility with customers having to drive past our gas, wash and c-store to get to the drive-thru. When these customers need fuel, a car wash or a lottery ticket, they know where to go. They are already regular customers at our Tim Horton’s for morning or afternoon coffee and snacks. Also, it’s a simple matter for customers to use our other services, and they do because we make it convenient for them.”

Dhahan partnered with BC Hydro in 2018 to place a fast charger at the Surrey location at 16815 96th Ave. “They came to me and told me there was not enough capacity in our region and asked if they could install a unit on my site. This installation cost me nothing, but I get no payback from the equipment. However, people charging cars come into the c-store and the Tim Hortons for the 20 minutes their cars are charging. For us, this means more sales in coffee, donuts and drinks.”

Altogether Dhahan remarks that success has come from being diversified and maintaining an updated curb-side image that is clean, efficient and contemporary.  “You must have multiple offerings to be successful in this marketplace. This thinking means hot foods and a menu that is responsive to the local demographic. Having a branded foodservice partner also delivers trust to customers that already know and understand the qualities of the menu. And, while there is good money to be made on volume gas sales, real success comes from a diversified package that attracts customers and provides multiple offerings.”