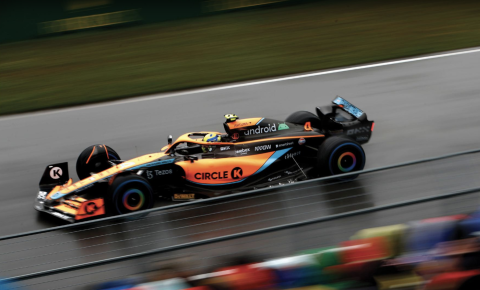 The McLaren MCL36A at the 2022 Montreal Grand Prix sported the logo of a brand-new sponsor: Circle K.

The man who literally wrote the book on motorsport sponsorship, Guy Edwards, said it best: “Race cars run on money, not fuel.” The ex-Formula One driver, who competed in the top echelon of his sport from 1974-77, went on to achieve even greater success as a businessman who brokered innovative sponsorship deals.

In early 1992, his book, Sponsorship and the World of Motor Racing was published and it’s since gone to become the absolute bible on this topic. It’s also a rare collector’s item that sells for over $500 per copy—provided you can find a copy.

For a good part of his own career in motorsport, Brown was an ultra-competitive sort, rising up the ranks while securing his own funding deals along the way. “Back when I was racing, I had to do all my own sponsorship because I didn’t come from a wealthy family,” he said during an interview at this year’s Honda Indy Toronto. “That forced me to understand the business worked, why companies would sponsor [someone], what they needed to get out of it.”

If you take a look at the McLaren Racing website, you’ll see that it’s littered with sponsor logos. The outfit enjoys the support of a wide range of big-time brands in a wide range of sectors, including Coca-Cola, Goldman Sachs, Dell, Hilton Hotels, Unilever, Stanley Black & Decker and Gulf Oil. Clearly, the man knows how to strike a deal.

But it was still a surprise to see the McLaren MCL36A at this year’s Montreal Grand Prix sporting the logo of a brand-new sponsor: Circle K. The deal, worth an untold amount—but likely in the millions of dollars—was just for the single race.

“The Canadian Grand Prix is a beloved and premier event that draws millions of viewers and fans globally,” said Melissa Lessard, Head of Marketing for North America at Couche-Tard, in a press release. “So this partnership with McLaren is the ideal backdrop to showcase our global Circle K brand and our shared love for speed, convenience, and world-class mobility innovation.”

With the surge in popularity of Grand Prix racing, helped in no small part by the successful Netflix TV series Drive To Survive, brands are climbing all over themselves to sponsor teams and drivers. Formula One has always been one of the most expensive sports in the world for sponsors; now, the deals are absolutely eye-watering. But other forms of motorsport may also offer tremendous return on investment—and for a lot less money.

Earlier this year, another Canadian company, Parkland, announced a sponsorship deal with another leading motorsport team, Chip Ganassi Racing. In this case, it’s a multi-year deal to showcase Parkland brands in two different race series, NTT IndyCar and Indy Lights. (While these are also professional race series, they run only in North America and the global TV audience is much smaller than it is for Formula One.)

“Partnering with Chip Ganassi Racing to put our industry leading brands center stage at motorsports’ biggest events is a tremendous opportunity for us,” said Ian White, senior vice president of strategic marketing and innovation at Parkland, in a press release. “Delivering high-quality products and experiences to our customers closely aligns with the level of commitment and quality race fans have come to expect from the Ganassi team.”

Closer to home, there are plenty of opportunities for owner/operators to sponsor national or even regional race teams or drivers. While the level of exposure can’t match that of Formula One or IndyCar, the budgets are also significantly lower. National motorsports series in this country include the Canadian National Superbike Championship, NASCAR Pinty’s Series, Nissan Sentra Cup, Sports Car Championship Canada presented by Michelin and the Porsche GT3 Cup Canada. Some of these series have strong media coverage, including TV highlights packages aired on TSN/RDS.

If you’re an owner/operator looking to just test out the idea of sponsoring a driver or rider, there’s also plenty of regional racing taking place across the country. If you’re located near an oval race track, you should definitely check out the action on any given Saturday night. Here’s what you’ll find: a stack of hungry drivers looking to climb the ladder to NASCAR and a group of completely engaged fans, many of them bearing the logos of their favourite drivers.

According to leading analytics firm Performance Research: “NASCAR fans provide one of the highest levels of brand loyalty and sponsorship support of any one of the hundred or so sports and special events we’ve tested.”  In addition, 71 percent of the NASCAR audience reported that they “almost always” or “frequently” choose a product involved in NASCAR over one that is not, simply because of the sponsorship.

While a regional oval track race is not a NASCAR race, the fan base is very similar. So there’s a loyal set of customers out there ready to be courted; show support for their favourite driver and you could be surprised by the results. There are many ways a motorsport sponsorship package could play out, including everything from in-store promotions to driver appearances to trackside hospitality. But the key to any sponsorship deal, according to Zak Brown, is to track your return on investment (ROI)—and to make you’re getting your money’s worth.