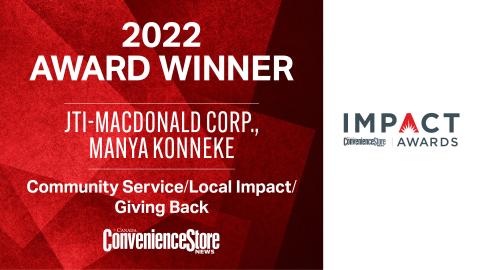 In the lead up to the holiday season, JTI’s sales force mobilizes staff to collect cash and food donations in support of local food banks across the country. Last year, the Fill Up a Ford Campaign collected enough food and money to provide 50,000 meals to those in need. It’s a huge accomplishment that started with one woman—Manya Konneke.

Nine years ago, after watching a news segment about her local food bank, she challenged her team to make a difference by collecting enough donations to fill up her corporate vehicle.

“My regional lead at the time thought it was a great idea and it went to head office, then snowballed,” recalls Konneke, an activations specialist who started her career at JTI as a trade marketer. “It’s amazing to see how this little challenge turned into such a staple…. It warms my heart.”

Her contribution to JTI’s “culture of giving is one of a lasting legacy,” according to the company. Today, employees in communities across the country fill up vehicles every year, engaging in a bit of friendly competition, with an added incentive—JTI matches the winning team’s contribution.

Last year, Konneke’s British Columbia-based team usurped the reigning Alberta champions in the company-wide challenge. “I think we pushed it harder because we had the floods, so we were supporting our Fraser Valley food bank.”

Konneke still gets overwhelmed when she thinks about how much her colleagues do to help their local food banks. “I thought of a fun idea, but everyone has taken it across Canada by getting involved,” she says. “It’s such a great thing to do and it makes me so proud of this company.”