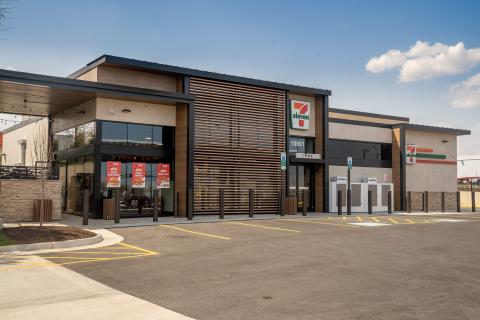 The first to offer customers two restaurant options in one location, the new store features 7-Eleven's Raise the Roost Chicken and Biscuits restaurant, as well as Parlor Pizza, an on-site pizzeria with hand-tossed, made-to-order pizzas. They have separate ordering counters but share indoor and outdoor seating.

One of just eight experiential stores 7‑Eleven operates in the U.S., the Manassas Evolution Store also features fresh-baked-on-site croissants and cookies, customized espresso drinks, and artisan craft sodas and sparkling waters, as well as a wine cellar and beer cooler.

The 7–Eleven Evolution Store concept is an experiential testing ground where customers can try and buy the retailer's latest innovations in a pioneering store format. In addition to the Manassas location, the retailer operates these high-concept stores in North Texas, New York City, Washington, D.C., San Diego. All Evolution Stores include a restaurant concept.

"Since 7-Eleven began selling milk and bread from an ice dock in 1927, our spirit of innovation has allowed us to evolve to meet the ever-changing needs of customers for over 90 years," said 7-Eleven EVP and COO Chris Tanco. "Today's opportunity is in the QSR space, and we are responding by aggressively rolling out our restaurants across the country — both in Evolution stores and beyond. Our plan is to open nearly 150 restaurants in 2021."

The Manassas Evolution Store also is the first Evolution Store to serve as a real-world testing ground for 7‑Eleven's Sips and Snacks emerging brands program, which means customers will be able to purchase items they won't find at many other 7‑Eleven stores or retailers. Since 2018, 7‑Eleven has hosted an invitation-only showcase for up-and-coming entrepreneurs to present their most innovative products. Hundreds apply to participate, but fewer than 100 are invited. Franchisees and company employees vote on their favourites, and the hand-picked winners land on store shelves where customers have the ultimate say.

Irving-based 7-Eleven operates, franchises and/or licenses more than 72,800 stores in 17 countries, including 12,000 in North America.

Last month, Norm Hower, VP and general manager of 7-Eleven Canada, told Convenience Store News Canada that the Evolution Store will make its way to Canada, eventually, though not likely in 2021.