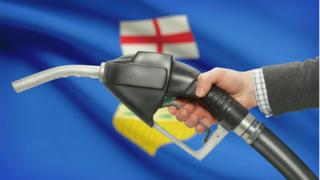 He says the price at the pump will drop by 13 cents per litre on April 1 for both gasoline and diesel.

Also starting April 1, the government will deliver a $150 rebate on electricity bills.

Alberta drivers are facing onerous gas prices due to global demand and the war in Ukraine - stations are selling fuel at $1.50 a litre or higher.

Kenney had initially declined to offer gas pump relief when asked by reporters about it last week.

The Opposition NDP had called on the United Conservative government to act on high gasoline prices as well as swiftly rising utility bills.

Last week, Kenney hinted his government was working to provide financial relief to consumers being hammered by high gas prices at the pump.

Kenney said he recognized that spiking global oil prices, pushed even higher by the war in Ukraine, are delivering a windfall for the provincial treasury but a punishing hardship to drivers.

"We can't undo the global forces that are pushing up energy and other costs. It's something being borne by people across Canada and around the world,'' Kenney told reporters in Calgary on Friday. "But because the Alberta treasury does benefit from additional resource revenues when prices go up, we think we have some capacity to provide people with at least some relief.''

Consumers are being bludgeoned with higher costs across the board, from power bills to groceries.

In last week's budget, Kenney's United Conservative government outlined a rebate program for natural gas bills. But the Opposition NDP criticized the plan because it doesn't kick in until the fall and contains price trigger points not likely to be reached.