The headwinds buffeting the auto industry made themselves felt at the Frankfurt Motor Show, with companies confronting a slowdown in sales due to global trade uncertainty and pressure from governments to lower emissions of air pollutants and greenhouse gases. 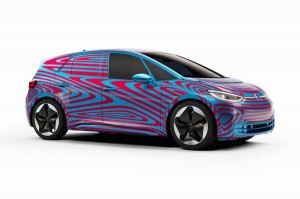 Signs of the times at this year's show include a slew of new, market-ready electric cars led by Volkswagen's ID.3 compact that aim to reduce greenhouse gas emissions.

European carmakers will be rolling out new battery-powered vehicles to meet the European Union's tougher limits from 2021 on emissions of carbon dioxide, the greenhouse gas blamed for global warming. The lower limits are part of the EU's effort to meet the targets of the 2015 Paris climate accord. China, the world's largest auto market, is also pushing for more low-emission vehicles.

Yet it remains very much open whether consumers will want to buy electric cars, given concerns about range, lack of places to charge away from home, and higher purchase prices. Battery vehicles were only 1.8% of the European market through the first six months of the year, according to figures from industry analysts at JATO Dynamics. The cars have sold better in the high end of the market, as exemplified by Tesla's Model S and Model X.

The argument for rolling out so many new electric cars is that consumers need to see enough to choose from before they will change their purchasing habits. Some 20 models will hit the European market by 2021, targeting 400,000 in sales, according to research firm Bernstein, in a European market of roughly 15 million cars sold annually.

Volkswagen has committed most heavily to electric cars among European manufacturers. It hopes to have a mass market electric car in the ID.3 compact, which it says will have a base price under 30,000 euros ($33,000), about as much as a similarly equipped Golf diesel.

Others with new electric offerings include Honda with the e, which replaces side mirrors with cameras, and Daimler's Smart with restyled versions of its small cars. At the high end, Porsche is taking aim at the Tesla Model S with the Taycan, a high-performance coupe starting at 152,000 euros in Germany including value-added tax and from $152,000 in the U.S.

Ford Motor Co. says that more than half of its European sales will be electric-powered by 2022 as it unveils a premium model of its Puma crossover that uses recovered braking energy to boost acceleration.

Ford showed off the Puma Titanium X at the Frankfurt Motor Show. The vehicle is a so-called mild hybrid, meaning it can store energy from braking and coasting in a 48-volt lithium-ion battery and send that power to the wheels to assist the gasoline engine when needed.

It says it will have a battery-only SUV based on the Mustang in 2020. In the meantime it is offering plug-in hybrids that combine battery power with internal combustion engines to lower emissions and increase mileage. Like all automakers, Ford is facing stricter European Union limits on average emissions of carbon dioxide starting in 2021 and must find a lower emission vehicle mix to avoid fines.

Pieter Nota says the Munich-based luxury automaker delivers ``power of choice'' to consumers by offering “`the drive train that they want and need.'' The company will add a battery-only version of its X3 SUV next year to round out conventional and hybrid versions of the vehicle. BMW is even showing off a concept car powered by hydrogen fuel cells.

BMW is relying on the mix of vehicles to comply with tighter C02 emissions requirements in Europe while competitor Volkswagen is making a big push into battery-only cars with its ID.3 coming to market next year despite currently low uptake by consumers of battery-powered cars.

Daimler's Mercedes-Benz is showing off a long, sleek battery-powered concept vehicle that could join the luxury carmaker's model lineup alongside its S-Class flagship sedans.

The Vision EQS is the latest version of the company's EQ series of battery vehicles, which were a key theme at the Frankfurt Motor Show.

CEO Ola Kallenius said: ``What we showed today is the first large-platform sedan, fully electric on a dedicated platform, so we think we can capture even more customers through having a wider offer.''

The concept, with a black LED display instead of a grille, slightly bulging wheel wells and a long, sweeping illuminated line running along the vehicle, is "a hint'' of what the production car might eventually look like.

The company says the four-seater car has two electric motors that accelerate it to 100 kph (62 mph) in 4.5 seconds and an exceptional battery range of 700 kilometres (435 miles.) Kallenius declined to specify how the company achieved range beyond what other electrics currently offer.

Volkswagen CEO Herbert Diess says his company's massive scale will enable it to make profits on large numbers of affordable electric cars it aims to sell in the next several years.

Electric competitor Tesla has not yet turned a profit while analysts say fellow German automaker BMW has lost money on its i3 electric.

Diess told The Associated Press: “Our approach is different. We come with high volumes, we come with a dedicated platform that is only for electric cars, and we generate a lot of scale because we are investing at the same time in China, in Europe, and in the US.''