The US$19.5 million price includes US$13.2 million in cash and US$6.3 million for the repayment of debt and the retirement of lease obligations.

As part of the co-manufacturing agreement, BioSteel will produce Flow’s portfolio of branded water at the Verona Facility, as well as its own BioSteel-branded sports hydration drinks.

“The sale of the Verona production facility is a major milestone towards achieving profitable growth of the Flow brand," Flow founder and CEO Nicholas Reichenbach, said in a release. "Through a significant reduction in our operating expenses associated with operating Verona and a material reduction in related future lease obligations, we have meaningfully improved our financial position and streamlined our organization. By maintaining ownership of our Virginia artesian spring and securing a co-manufacturing agreement with BioSteel, we expect continuity in our supply chain as we invest in continued revenue growth in the U.S.”The deal supports BioSteel's rapid growth strategy and expansion of its U.S. footprint.

“BioSteel is growing at a record pace, with thousands of new points of distribution added since the beginning of the year, and this acquisition allows us to unlock greater efficiency in our business as we achieve full vertical integration of our U.S. operations," said Bruce Jacobson, president of BioSteel, adding the agreement "supports our ability to consistently supply our premium ready-to-drink sports drinks, packaged in environmentally friendly Tetra Paks, which is a competitive advantage.”

Founded in 2009 by John Celenza and Michael Cammalleri, who spent 15 years in the NHL, BioSteel targets athletes and consumers a better-for-you zero-sugar sports drink offering that touts natural ingredients and electrolytes in an eco-friendly Tetra Pak.

This has also been a big year for BioSteel.

Jacobson joined as president in June, bringing with him deep experience in the beverage category, including 17 years at Constellation Brands, and a mandate to further grow the brand.

In July, BioSteel and the National Hockey League (NHL) and National Hockey League Players Association (NHLPA) announced a multi-year partnership naming BioSteel the Official Hydration Partner of the league and players association. If you watch hockey, you'll notice BioSteel products being used by NHL players on the benches, in the penalty box and at the goal net. 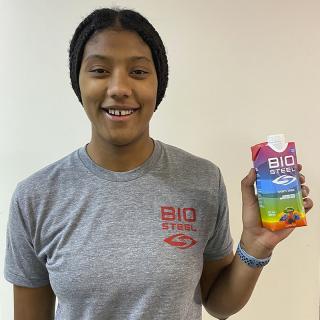 And, earlier this month, BioSteel announced an expansion of its dedication to hydrating the next generation, signing four elite hockey players - Laila Edwards, Sarah Fillier, Calla Frank, and Jade Iginla - who play on their respective national teams and represent the next generation of athletes.

With these commitments and more growth on the horizon, the Verona acquisition provides a unique opportunity for BioSteel to take more control of its own supply chain, while creating additional business value.

Part of BioSteel's point of differentiation is that it's packaged in eco-friendly Tetra Paks, which are recyclable and feature a plant-based cap, a critical element of BioSteel’s better for you (and the planet) value proposition.

BioSteel products are available online and by retailers, including Canadian convenience stores, across North America and beyond.

Founded in 2014, Flow’s mission is also to reduce environmental impacts by providing sustainably sourced naturally alkaline spring water in a recyclable and up to 75% renewable, plant-based pack. The company offers a diversified line of health and wellness-oriented beverage products: original naturally alkaline spring water, award-winning organic flavours, collagen-infused and vitamin-infused flavours in sizes ranging from 330-ml to 1-litre. Its products are available online and sold at more than 36,000 stores across North America.