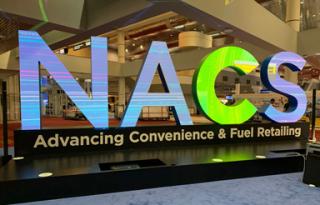 LAS VEGAS — Convenience and community have more in common than the same first two letters.

Convenience stores are an integral part of the communities they serve — from supporting youth sports to raising money for schools and everything in between. They are also the eyes and ears of their communities, as highlighted by the industry’s role in combating human trafficking.

The link between the convenience channel and its communities was a key theme on day three of the 2022 NACS Show. The day’s general session featured an address by incoming 2022-2023 NACS Chairman Don Rhoads.

“At my core, and what I am most passionate about, is being a convenience retailer,” he said.  “It’s in our company name and it’s in our industry name.”

Rhoads is president and CEO of Convenience Group LLC, based in Vancouver, Wash. The company owns, operates and franchises eight neighbourhood convenience stores throughout Washington and Oregon.

One store is located in the Fruit Valley Village neighbourhood of Vancouver, an area that some may consider “the wrong side” of town, Rhoads noted. However, he pointed out that grouped with the store are several community organizations, including the Lighthouse Community Credit Bank, Lighthouse Resource Center, and the Community Kitchen.

“Our stores are family-owned and community-driven,” he said.

Rhoads’ philosophy toward convenience retailing mirrors that of the industry. As a whole, the convenience channel donates approximately $1 billion a year. But it goes beyond that number. It is also about how “we lift our communities,” he added.

According to the new chairman, there are three core communities within the channel: the communities that c-store retailers serve; the people; and the industry itself.

“This is an exciting time for the industry,” he said. “As we redefine convenience, let’s redefine community.”

Joining Rhoads for the general session was Jake Wood, founder and chairman of Team Rubicon, a disaster response organization. Similar to the c-store industry, Team Rubicon is “full speed ahead in the communities we serve,” Wood said.

When it comes to serving people, individuals are faced with moments and decisions, and there are five key things to keep in mind, according to Wood:

It’s important, he pointed out, to never underestimate that moments can have a ripple effect on the community. “Every day we have the opportunity, a moment, to choose to make someone’s life better,” he said.