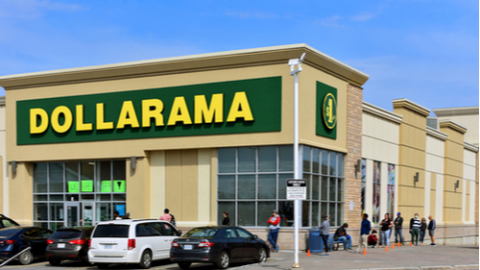 Dollarama Inc.'s sales climbed by double digits in its latest quarter despite some of its stores facing tougher new retail restrictions amid rising COVID-19 cases, the Montreal-based retailer said Wednesday.

The discount chain's same-store sales grew at a torrid pace in the first nine weeks of the quarter before more stringent measures to combat the pandemic reined in shoppers and curbed sales.

Still, overall sales increased 13%, with the company reporting earnings of $113.6 million in its latest quarter, up from $86.1 million a year ago.

"We entered the quarter with solid momentum, in this case right through early April, with same-store sales growth in the mid-teens,'' Neil Rossy, Dollarama president and CEO, told investors during a conference call to discuss the company's results.

"Then in the last month of the quarter, our sales were negatively impacted by additional measures taken by provincial governments in response to the pandemic's third wave.''

The Ontario government's stay-at-home order issued in April banned the in-person sale of non-essential goods, limiting purchases in brick-and-mortar stores to groceries, cleaning supplies and other essentials. The province has announced the ban will be lifted Friday.

The store, which sells a broad assortment of food, general merchandise and seasonal items, has 1,333 locations across Canada with about 40% located in Ontario.

"Nothing breaks the heart of a retailer more than not being able to sell something that you have that the customer wants,'' Rossy said. "But we need to follow the laws of the land, as everybody else does.''

Yet some retail workers, including at Dollarama, have had to respond to angry customers who were unable to buy a product that had not been deemed essential.

"We are sensitive to the customer's frustration,'' he said. "But the vast majority of customers understand we're simply following the rules.''

Dollarama's results suggest that while customers shopped less often in the quarter ended May 2, they stocked up and bought more items when they did go out shopping. For example, while the retailer's transactions dropped by 3.2% in the quarter, the average basket size grew 9.3%.

In light of ongoing pandemic disruptions, the company's results were solid, Irene Nattel, an RBC Dominion Securities Inc. analyst, said in a note to clients.

She pointed out that Dollarama had very strong same-store sales momentum of 15.2% in the first nine weeks of the quarter, results that were moderated by the highly restrictive ban on the sale of non-essential items in Ontario.

Meanwhile, many retailers in recent weeks have expressed concerns with supply chain and shipping issues.

The Canadian Federation of Independent Business said in a report Wednesday that supply chain delays and interruptions are increasingly impacting small business operations and will result in higher prices.

"Everybody is having a hard time getting containers,'' Rossy said. "I would say that Dollarama's business model mitigates those risks more than it does for most because the majority of our goods are proprietary that we import ourselves and therefore we sit on inventory of those goods.

"That inventory provides a buffer that most don't have,'' he said. "That buffer allows us to prioritize which containers are going for which goods at what time to help mitigate the risk of running out of any given item.''

The discounter noted that the quarter is being measured against a comparable period last year marked by the onset of the pandemic.

Dollarama said it experienced a surge in transactions in early March 2020 as customers purchased higher volumes, but then recorded a sharp decline in transactions amid increasingly strict public health measures.