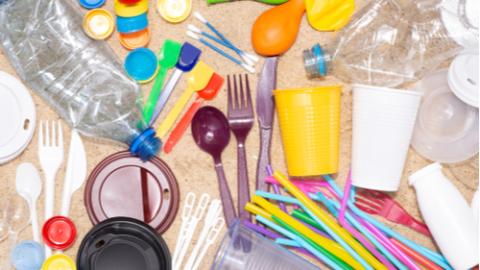 Environmental experts are praising Montreal's decision to ban some kinds of single-use plastics, but they say Canada is still a long way from being plastic-free despite government promises.

Montreal Mayor Valerie Plante announced on Wednesday that the city would ban retailers and restaurants from distributing plastic bags in the city by end of August 2022. Six months later, a number of other single-use items will be banned, she said, including takeout food containers, cups, lids, utensils and stir sticks made from unrecyclable or hard-to-recycle plastics.

Plante described her city's plan as the most ambitious in North America, and she said what set it apart was the focus on reducing plastic at the source.

"For some cities, recycling is priority No. 1," she said. "For us, it's reducing, reducing, reducing." The mayor added that the urgency was heightened by the fact the city's only landfill is expected to be full by 2029.

Ashley Wallis, a plastics pollution expert with environmental charity Oceana Canada, described Montreal's initiative as a "great step," and she had particular praise for the decision to include drink cups on the list of banned items—something other governments, including Ottawa, have stopped short of doing.

"We do know that 47% of Canada's plastic waste is from single-use plastics and plastics packaging, so I think there is a huge opportunity by focusing on things like these single-use takeaway items," she said.

However, Wallis said despite the cities' best efforts, Canada is still far away from a plastic-free future.

Ottawa has also promised to impose recycled-content requirements. As well, the federal government has discussed making some companies responsible for collecting their products made of plastic when they aren't useful anymore, as part of a goal to achieve zero plastic waste by 2030. But those regulations, which were promised by end of 2021, have yet to be unveiled and could be derailed by the upcoming federal election, Wallis said.

Federal legislation on plastic ought to include takeout cups, she said, as well as all forms of polystyrene and oxo-degradable plastics, which break down quickly. Longer term, she said, what's needed is a comprehensive, sector-by-sector plan to reduce and reuse plastic, with manufacturers being given the main responsibility for collection and recycling.

Even Montreal's plan contains some omissions. It doesn't include cardboard takeout containers with plastic coating and excludes non-profits that distribute food, for example. More importantly, it can't affect anything outside the city's jurisdiction, which includes grocery store items because they're packaged outside city limits.

Karen Wirsig, the plastics program manager for advocacy group Environmental Defence, said more federal and provincial action is needed to push back against a plastics industry that is reluctant to change. The most effective way to do that, she said, is to "make the people who produce those things responsible for them at end of life," and make sure they can't just bury or burn them.

While that's largely a provincial and federal effort, she said cities, too, have a role to play in plastic reduction.

In addition to banning plastic items, as Montreal has done, she said cities can create more local infrastructure to help businesses and restaurants offer reusable containers. "Nationwide standards are important. But for things like infrastructure, those really need to be local," she said.

Wirsig acknowledged the COVID-19 pandemic had represented a setback for plastic reduction efforts, but she said it was also an opportunity for creative thinking.

On one hand, takeout and online ordering have skyrocketed, creating more waste. Originally, the pandemic led to fears—now largely debunked, she said—that the disease could be spread on containers. On the other hand, she said the pandemic also led many people to question their relationship to their local environments and they may be ready for positive change.