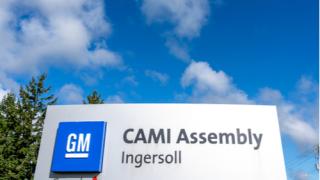 OSHAWA, Ont. - The federal and Ontario governments are spending $259 million each to support production at General Motors facilities in the province, including an electric vehicle production line they say will be the first of its kind in the country.

"Today is proof that the Canadian auto sector is here for the long term.''

Production of the BrightDrop electric commercial vans is set to begin in Ingersoll later this year.

Champagne test drove one of the vans at the Oshawa facility, as did Ontario's Economic Development Minister Vic Fedeli. Both appeared alongside Premier Doug Ford to announce both governments' funding for the $2-billion GM investment, which the politicians said would also boost production at the Oshawa facility.

The company said that shift would create a total of 2,600 new jobs since the plant reopened following an operations shutdown in late 2019. General Motors previously said that about 1,800 jobs were created over two shifts in November 2021 when production restarted after nearly two years.

"We're making Ontario the best jurisdiction in North America to build the vehicles and batteries of the future,'' Ford said.

The premier's spree of support for electric vehicles, which began months before the provincial election campaign that's expected this spring, represents a pivot from earlier in his government's term.

Ford has so far not committed to bringing back any rebates or other incentives for buyers.