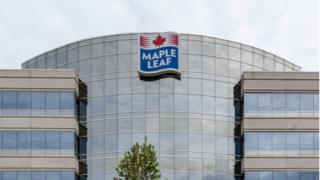 A significant slowdown in sales of plant-based food products is prompting Maple Leaf Foods to reassess its strategy of investing in the category.

The Ontario-based company said Thursday it has seen a marked decline in performance in the plant-based protein category, which it believes may suggest "systemic change'' in the extremely high growth rates once expected by the industry.

"In the past six months, unexpectedly, there has been a rapid deceleration in the category growth rates of plant-based protein,'' said Maple Leaf chief executive Michael McCain, on a conference call with analysts.

"Of course, our performance has suffered in the middle of this, but the more concerning set of facts are rooted in category performance, which is basically flatlined.''

Maple Leaf - once known primarily as a packaged meats company specializing in products like bacon and cold cuts - has worked hard in the last four years to rebrand itself as a "protein company.'' In an effort to capitalize on the rise of veganism and plant-based eating, Maple Leaf purchased two alternative meat companies - Lightlife Foods and the Field Roast Grain Meat Co. - and announced plans to build a $401-million pea-protein processing plant in the U.S.

The company also launched a line of products made from a blend of plant and animal proteins, a "direct response to Canadians' desire to eat sustainably,'' McCain said at the time.

However, McCain said Thursday the plant-based category as a whole has since softened beyond the company's expectations. He said Maple Leaf's investments in the space were rooted in expectations of a long-term, sustained growth rate of 30% or more. But he said industry-wide, sales in plant-based packaged food products appear to have peaked in mid-2020 and have been declining at a rate of between 2% and 3% in each of the last two quarters.

"There is a fair amount of COVID noise in the market now, and we can't discount that,'' McCain said. "However, it isn't only COVID noise, and we're going right back to Square 1 with the consumer to fully understand what has changed, if anything, and why.''

Maple Leaf is not considering divesting its plant-based assets, McCain said, but it does need to determine what is going on with the market broadly so that its strategy can be adjusted if necessary.

He said the company expects to be able to provide more details to investors at its next quarterly update.