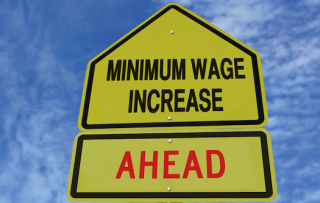 New Brunswick is hiking its minimum wage by $2 per hour next year - the largest increase in 40 years - but a business advocate says that would strike a blow to small companies already suffering from COVID-19.

READ: NB's minimum wage hike will create “unsustainable” economic climate for c-stores: CICC & ACSA say this is what the government can do to support the industry

Labour Minister Trevor Holder said Thursday New Brunswick's current minimum wage of $11.75 per hour is the lowest in the country and well behind that of neighbouring Atlantic provinces.

"This fact is something that has been troubling me as minister of labour for some time,'' he told reporters. "To be frank, it's downright embarrassing.''

Nunavut has the highest minimum wage in the country - at $16 per hour - while the Yukon, Northwest Territories and British Columbia are next at $15.20 per hour.

Holder said the increase to $13.75 per hour will come in two increments of one dollar, on April 1 and Oct. 1.

"The increases next year are a one-time course correction that is necessary to make us more competitive and improve the standard of living for low-income earners,'' he said.

The minister said that while the hike will impact small businesses, the increase will help recruit and retain employees.

But Louis-Philippe Gautier, Atlantic senior director legislative affairs for the Canadian Federation of Independent Business, says the increase will add pressure on employers, who are already being squeezed.

"This massive increase in the minimum wage is happening essentially at the worst time for many small businesses,'' Gautier said in an interview Thursday. "There's only 39% of New Brunswick small businesses who are at normal revenues at this point of the pandemic.''

He said business groups would have liked to negotiate with the government to obtain a different schedule for the pay increases or to obtain other help, but he said they weren't given the opportunity.

"The unfortunate part is government chose not to have the conversation with the business community,'' Gauthier said. "Government just informed us of their decision earlier in the week.''

Since 2019, New Brunswick's increases in the minimum wage have been tied to rises in the consumer price index. Holder says that will resume in 2023.